CONTRAST:  Her Version, His Version

I was reticent to travel from Ottawa to Achray on Saturday morning, so I reserved a suite of rooms at the Grey Gables Manor bed and breakfast in Pembroke.  I had stayed there before on a cycling trip and enjoyed it immensely.  It is a luxurious splurge.  We had a series of rooms, we were booked into the Library.   There was the main room - the library with a wood burning fireplace, two bedrooms, a bathroom with a big tub, a nice shower, two sinks and two ornate mirrors that looked great, even though I would have never selected them myself.  There was a separate bathroom with a toilet and sink.  LT wanted to leave earlier than the breakfast that came with our room reservation, but I knew it would be delicious.  I convinced him to stay long enough to have breakfast, instead of Tim Horton’s drive through, and asked the proprietor if we could have it served a half hour earlier.
Our stay at the Manor was sweet luxury, I knew the next night would be on a bit harder surface with a lot less bathroom facilities.

We were a bit later than we planned at the outfitters to pick up the canoe.  Once the paperwork was filled in and the canoe strapped on, the next step was to get our park permit at Sand Lake Gate.  We made it to the campground at Achray shortly after 10 a.m.  I took pictures of the glassy lake while LT unloaded the car and loaded the canoe to his plan.  By the time we set off at 11, the water had gone from glassy to wavy, but not overly rough.

We paddled into the wind towards where we thought the first portage was.  We kept going, and going, and going, until we got to Carcajou Falls.  Oops.  We could hear the falls, but didn’t paddle the extra 20 feet to see them.  LT checked the map and realized we had missed our turnoff into the first portage.  It took us an hour off course by the time we paddled back to the right spot.

The first portage was just a tease at 50 M.  However, I was to learn that no matter how long the portage is, the unloading and reloading of the canoe still takes the same amount of time. 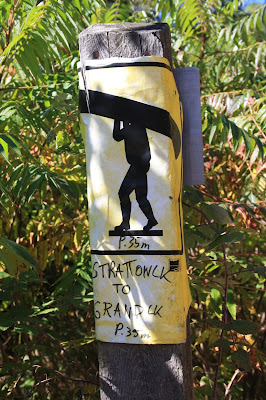 We paddled up a narrows leading into Stratton Lake, passing under one of the many train bridges left behind by CN.  I had been warned that Stratton Lake could be a tough paddle if the wind was going the wrong way, but we were blessed today.  The weather was amazing, the temperatures warm, the sun was shining, a real late summer date in the autumn.
The paddle down Stratton Lake didn’t take long.  Although LT was a bit nervous that we had lost some time with our “detour” earlier in the morning.  We walked over the 80 M portage, you could basically see one side from the other.  Hey, this portaging thing is pretty easy!  Right?  Riiiiiight.

We steamed down St. Andrew’s Lake without any problem.  The next portage was 550 M.  We did a double carry.  We were lugging a lot of stuff.  You’d think we were out for a week!  High Falls Lake was really pretty with islands.  It wasn’t a far paddle then we were in Ooze Lake after the 300 M portage. I was starting to flag.  I can paddle and walk, but add a huge pack and uneven ground and don’t feed me lunch and I start to act like a cranky 3 year old needing a nap.  Ooze Lake was creepy.  It is full of floating rhizomes.  We could easily canoe around them, it just gives me the willies looking at something that looks like “land” in the middle of the lake that you know very well you can’t stand on.  There were a fair amount of dead trees in the water too.  Fortunately it’s a very small lake.

The last, longest portage of the day was ahead and my legs were like rubber.  I think we stuffed a wrap sandwich into our mouths on one of the portages, but I forget which one.  LT had a plan that we would take out his stove and heat up the sandwiches to melt the cheese, alas, we were conscious of the time so no stove.   I also wasn’t drinking enough water.  We were rushing, worried that we would be at our destination in the dark.  We weren’t.  Not even close.  It was about 5 p.m. when we chose a campsite very near the next morning’s portage at the top of the lake.  There is a very famous campsite on this lake, it is further down, and today it was occupied.  Of the seven campsites on the map, three were occupied tonight.  It’s always easier to tell when it gets dark and the campfires are lit as to how many sites are being used.

The campsite was a nice one, I would use it again.  It had enough privacy, especially for the last weekend in September.  There was a bit of a boggy area on one side, but bugs aren’t much of an issue this time of year.  I put on my bathing suit bottom with my t-shirt and took a dunk in the lake.  I don’t think I’ve ever swam in fresh water this late in the year.  It was a bit cold, but not by much.

The tent was erected, dinner was started.  My responsibilities were minimal.  I unpacked my brand, spanking new sleeping bag.  I had scooped a silk bag liner from my son’s European trip stash.  I tossed my clothing bag and my pillow into the tent as well.  I had brought my new hiking shoes as well as running shoes.  We had been total princesses all day, neither of us had gotten wet feet.  The dangling hiking boots off the back of my backpack had been much more of a nuisance than anything else.

Oh, and we had dragged around a full bag of cut firewood from the Park gate.  Yeah, seriously.  Well, I didn’t drag it, but it was part of "our" burden during portages, one less thing to carry tomorrow though as LT built a great campfire.  We didn’t have either a hatchet or saw with us, we didn’t make use of any of the dead wood around us.  We had figured it would pretty much be picked clean by this time of year anyways.

Once it was dark, with the fire down to embers, I wandered to the shoreline, which was a great smooth, easy sloping rock.  There were millions of stars out.  With a slight breeze, the stars reflected on the surface of the lake were twinkling like crazy.  We watched them for a long time.  My only disappointment was – no loons!  I had been joking that we should ask for our money back for the campsite, there should be loons on every lake!  The next morning, one finally started calling out from our lake.  Perfect!
Posted by Cici Canoe at 2:13 PM