Stoves - Key to a Great Trip

In Cheryl Strayed's book, "Wild", she admits that she didn't learn how to use her stove before taking off on her hike of the Pacific Crest Trail. As a result, she was trying to eat dehydrated meals just mixed with water. Ick. It's not the first story I've heard where people have struggled with their stoves, or just planned on not using one. A former co-worker said he and his wife attempted to do the PCT subsisting on Cliff bars. It didn't take them long to realize this wasn't a great idea. When you're out in the back country, you need good food, fuel for your body with all the calories you'll be burning.

I didn't do any research before buying my stove. L.T. already had one and I bought a similar model on his recommendation. I'm very happy with it, it still works great and I recently attempted to give it a good cleaning and tune-up.

L.T. has a kit that he uses to maintain his WhisperLite and I thought he was a wizard with special skills. This spring I decided to buy my own maintenance kit and give it a try. I picked my kit up at MEC. And I didn't tell him. Shhhhhhhh, it'll be our little secret!

We carry both stoves when we travel. Primarily to always have a backup. I do most of the cooking and I prefer to use my own stove. But sometimes we fire up both stoves to cook more than one thing at a time. On our very first trip he tried to show me how his stove worked and it seemed very tricky. Once I bought my own stove and had a chance to practice with it, I eventually became more comfortable. Although I still don't like using his stove, it performs slightly differently.

The WhisperLite is a white gas stove, it's got a variable control for how high the flame burns, you're supposed to be able to simmer on it, although "simmer" is a bit higher than it would be on your stove at home. Here's a picture of a brand, new, shiny one from MEC:
The stove is made up of three major parts, the stove itself, the fuel bottle, and the pump. On our trip to Catfish Lake a couple of years ago a mouse startled me and I fell over, landing on my fuel bottle breaking the pump. Oops. Fortunately you can buy just the pump.

For the fuel, I finally went to Canadian Tire and just bought a large can of Coleman Fuel. I used to rely on L.T. buying fuel and filling my fuel bottle. The fuel bottle with the pump is carried with the stove but not connected. This stove also comes with a pliable metal windscreen and a round folded circular piece that goes under the stove when cooking.

When researching camping tips, I spied someone packing their screen wrapped around their bottle, which is how I pack mine. And I use three little bulldog paper clips to both hold the metal around the bottle when packed and to keep it circular when cooking with it.

This stove has a special pin in it called a Shaker Jet Cleaner. If it seems clogged, you can separate the stove from the fuel bottle and shake the stove up and down. The pin moves inside, you can actually hear it clicking as it moves.

We have yet to have a stove not work on any of our camping trips (I hope I haven't jinxed myself here!). We don't carry the repair kit with us. L.T. has a good working knowledge of the stove's makeup, so if we needed it, he could probably do a repair on the fly as long as nothing was seriously broken.

The repair kit comes with a very good explanation booklet of what to do. Also I fished out the original booklet that came with my stove and it has some of the same content as well.
The "oven" I purchased at MEC consists of a heat diffuser, the pliable fabric tent-like cover and a small button thermometer that sits on the top of the cover. We've used the heat diffuser quite a bit. It is a metal disk that sits directly on top of the stove and is used to even out the flame from the stove. I use the oven to make pizza, cinnamon buns, savory buns, and even birthday cake!
I've found for baking it helps to cook over a fire we build. It's easier to get some distance between the pan and the fire. And I have used the oven cover over top a fire as well.
L.T.'s new stove: an alcohol stove. He expressed interest in trying one of these out so I picked one up as a stocking stuffer this Christmas. 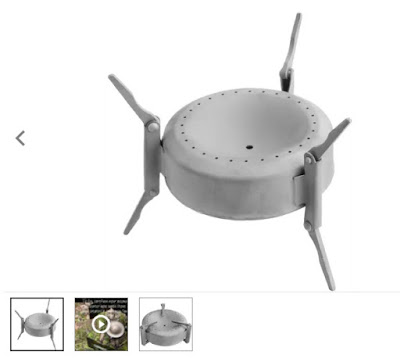 It's super lightweight and would be a good idea for a backpacking trip, maybe. We tried it on our last trip and weren't that impressed. It has no controls, you pour the alcohol into the dimple on the top, it slowly drains into the stove, you light it and it goes until it's empty. It was messy to use. Perhaps it could be put out if we had a tin can to put over it. But that would necessitate the carrying of the tin can. Maybe one of the pots would work, but that would mean one pot would have to remain empty (and clean) during cooking.

When I got back from this last trip I thought maybe my fondue set burner might work. 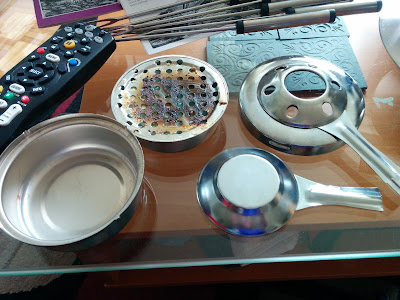 But I'd need something to support the pot on top of the burner. Hmmm. We did discuss using a tea light candle, again, it would need a support. Maybe a tin can with some holes drilled into it? This would be for the slow cooking of something like buns or bannock.

Here's evidence that I dirtied my hands cleaning my stove. 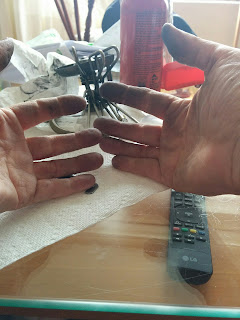 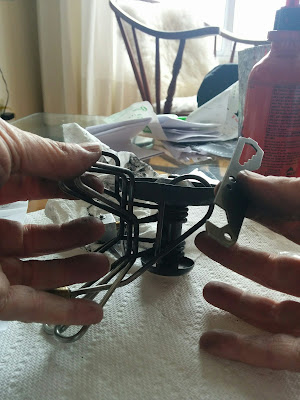 My recommendation is you select a stove you'll be comfortable to use and carry and learn how to use it before you head out on your first trip. The amount of delicious meals you'll get will be ample reward for a decision well-made!