The early morning was lovely but the waves hadn't completely disappeared. Owls were calling back and forth around 5:30 a.m. I was up at 6:30 a.m. and immediately started packing my hammock. The night had been breezy, but there was no rain. Today looked like a day without rain as well. The forecast predicted rain by our third day. 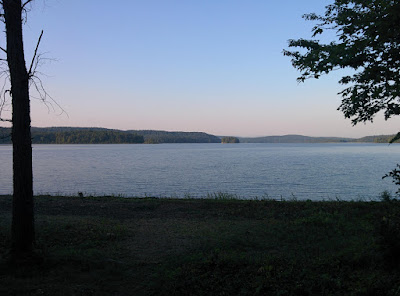 I also prepped dehydrated chicken and rice for lunch which was put into Thermoses.

We launched 5 minutes before 9 a.m. We made our way through this big lake fairly quickly. The waves would get a bit bigger, forcing us to tack back and forth to avoid being parallel with the waves. We stopped at one of the many portages along the upper shore as we rounded the last corner to take a break and stretch our legs. We got back into the canoe and got to the portage at 10:30. I was surprised to not really see anyone camped anywhere on this huge lake. We were looking for the crew of 13 teens, but they must have pulled up camp super early today too.


We met a couple coming out of the 2905m portage. We weren't in a hurry, this was our only portage today. It was a long one, the longest we'd ever done. The guy told us that the last third of the portage was on a road, great news! There were other bags at the landing. The couple said there was another couple with a dog doing a double-carry. 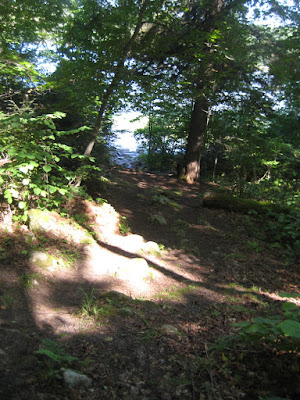 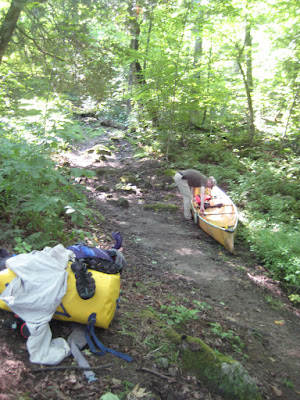 We took a break and had a snack (Cliff bar for me) and drink before starting up the intimidating hill facing us. The first quarter of the trail went from 342m to 404m. That hill went up, and up, and up for ages. Once we were done that part it didn't seem long before we were on the road. According to the map, it looks about 1/3 of the way into the trail. We took a couple of breaks. We were confused by the comments of the people we met and I had an older version of the map where the road wasn't shown properly.

We eventually crossed paths with the other couple. The dog was a barker, the woman was more concerned about the dog, so didn't return an offered greeting and the man was quite far back along the trail and mumbled about how it wouldn't get any better (it did).

Taking a rest on the road: 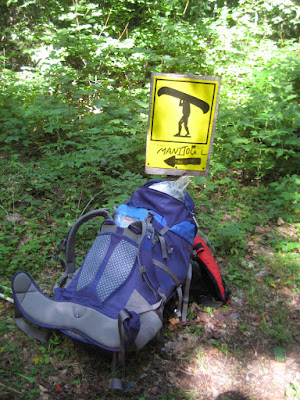 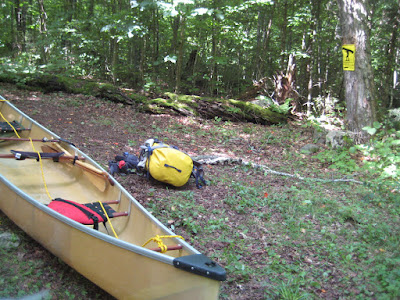 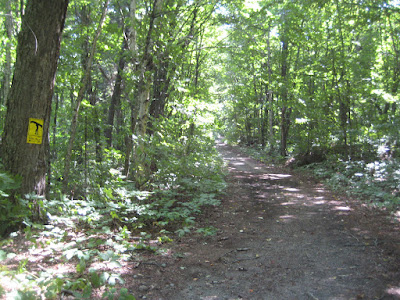 The road was easy to follow and finally we veered off of it onto the trail going to Three Mile Lake. We got to the lake at about 12:20 p.m. We stopped for lunch. I had a few crumbs of my Cliff bar left so I fed a friendly chipmunk. This portage end has a campsite, so he's probably well trained to beg. 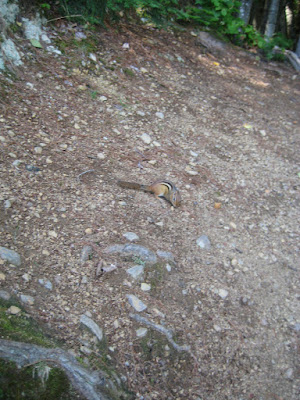 After a leisurely lunch, we got back into the canoe to check the next campsite out. We paddled over to it, got out, but weren't overly happy with it. The fire pit area was all quite wet, it didn't look very inviting to sit around. Back into the canoe we went to the next site, the 4th one down the lake. It looked pretty good and for a bonus, it is right across from the portage we would be going on tomorrow.

It was about 2 p.m. Still early, but we'd been moving since 9 a.m. I was glad to be home for the night. We set up camp.
We were lucky this trip, every lake had loons. We'd see then while paddling, we'd hear them while at our campsite. Today we saw a loon showdown. All of a sudden two loons emerged from the lake's surface and they started to flap their wings and make a ruckus. Two other loons from either side of the lake started to call towards them, almost like the wives telling them not to fight.

A group of merganser ducks burst out of the water near our site. They seem to all go underwater, swim around a bit, then all spring up together. Then they swim around, usually in a line, with the lead duck dipping his head into the water to check for fish.

We also saw a large bird fishing. It may have been some sort of hawk. It wasn't a heron or a cormorant. It had feathers that were flecked white and light brown. It flew quite high then would drop out of the sky into the lake.

At one point a swimming animal went by. It kept its head out of the water, so it wasn't an otter or a beaver. It was too small for that. My guess is that it was a swimming squirrel. It never dove or swam underwater. It came ashore not far from us, but we didn't see or hear it land. 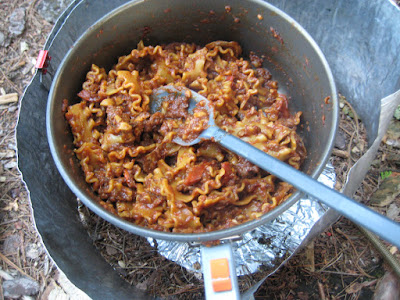 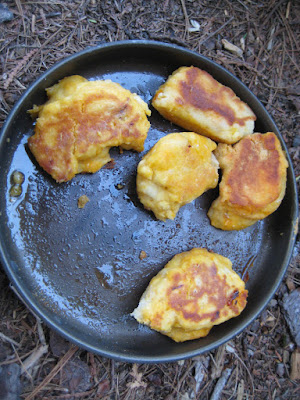 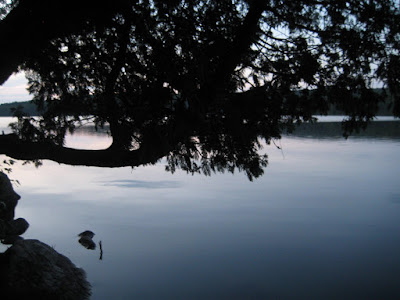 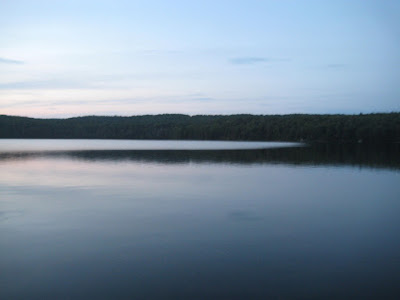 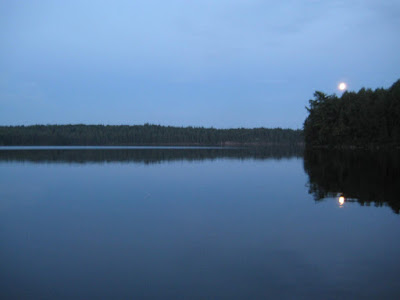 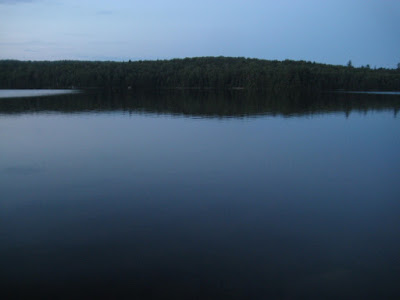 I burned the bottom of my big toe when I knocked over a boiling kettle, ouch! I developed a small blister that I was worried might be an issue with the next day's portaging. We had 5 portages to do covering just over 3 km.

I was in bed again at 9. It had been windy the night before, but it was silent tonight on Three Mile.