There wasn't much happening today. It was a rest day to be spent relaxing and just enjoying being out in nature.

Even though I'd gone with LT when he initially set up the bear hang of the new barrel, I hadn't gone back when he actually hung it. And I wasn't wandering back into the bush to get it down on my own. So I just stayed in my hammock for as long as I could before having to get up to use the facilities. And speaking of facilities, our campsite had a brand, spanking new thunderbox. A nice bonus. The only issue was that the shiny new chain seemed to be a bit tangled and it was a struggle to get the lid to stay in the fully upright position. But hey, I'm not complaining.

Here are some random pictures as I didn't take out my camera to document any of our meals. 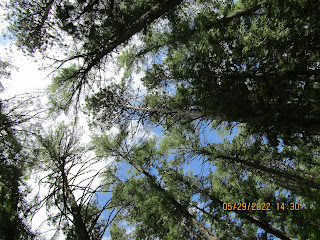 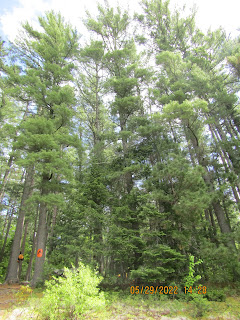 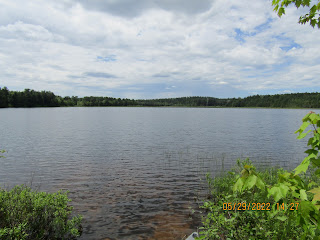 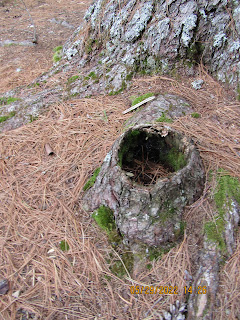 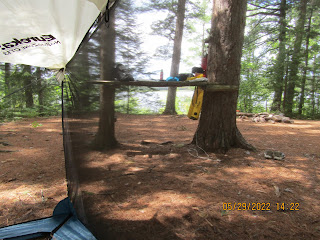 Highlights of the day - FOOD!

Breakfast was eggs with ready cooked bacon. There were supposed to be English muffins, but someone forgot them. However, they remembered to bring the jam I was going to put on such muffins. Speaking of forgotten items, I have a little list: my canoe seat (only requested when no portaging is happening), a head lamp (even though there were 4 to choose from), a Thermos (as we were going to test out a Thermos lunch) and last but not least, a cup to drink out of, predominantly for tea. None of these items were essential. The most used item is the cup, but one Thermos had been packed so it was put into use as the teacup.

Lunch was skipped as we hadn't eaten any of our snack the previous day. So snacks it was for lunch.

Supper was dehydrated lasagna. I tried something different this year. LT has mentioned that he finds the rehydration of the pasta sauce a bit annoying. I used my Blendtec blender to pulverize the dehydrated pasta sauce into powder. A 500 mL jar dehydrated and pulverized weighed only 95 grams. I had put a third of the jar into the supper, however I will use more next time. As well as the pasta sauce, the meal had (all cooked and dehydrated separately) mini lasagna noodles I get at Bulk Barn, mushrooms, red peppers, onions, and minced beef.

I put the contents in a pot and poured boiling water on it. I set it in a pot cozy with a lid and left it for 45 minutes. After that I cooked it for 10-15 minutes. I had brought parmesan cheese, however LT had also packed some cheese strings, so I added a few of those on top of the pot as it finished cooking and the meal was delicious. I had also made some garlic bread wrapped in foil that we heated up in the frying pan over the stove.

I did not pack any desserts that needed to be constructed from a dehydrated state for this trip. I baked some two-bite brownies. They were a bit dry, but edible. I also packed a couple of large chocolate bars. We split one on the first night. My stomach was upset from the garlic bread, so I was done eating for the day.

On the Friday before we left I made the mistake of watching a camping video on Youtube from a couple of campers that had taken a trip last summer out of Canoe Lake. On their first night they had hung their food barrel high away from their site. At 3 a.m. a bear came into the site, tore it down, and ran off with it. They got out of bed to see if it was still there and no, it wasn't. The bear was back for more at 5 a.m. in total darkness. Huffing and pawing the ground at their campsite. They packed up and left shortly after. On their way out they passed a spot on the shoreline where yellow tape was strung out and a bear trap was set out. When they brought their canoe back to the rental place, the guy said that someone else had had their food barrel taken. He went to look for it the next day and found it with six other barrels.

As dusk was falling at our site, there was a loud crashing noise coming from behind the campsite. At this site it's not a far distance to get to the train track. I'm sure that track is used as an animal highway. As it was dusk, I assume it was a deer just trying to come down to the lake for a drink of water. I wasn't taking any chances. I was alone in the bug shelter, LT was doing something by his hammock. I grabbed the kettle and a metal mug and clanged them together to make a lot of noise. Whatever animal it was, it turned back and did not come into camp.

Everything with scent goes into the food barrel to be hung. Everything. Lip balm, toothpaste and my antacid tablets. I had chewed a few to calm my roiling belly, but had not left enough in my pocket. Off they went into the bear hang.

I was struggling to fall asleep. My stomach was giving me grief. I lay in my hammock listening to every single thing I could hear. The woods were noisy tonight. We went to bed earlier tonight than the previous night. I struggled to get comfortable. I had the not-so-brilliant idea of putting my new mattress inside my new bivvy bag to help keep it in place. It was a disaster. I twisted and turned in my hammock, having an even harder time to control where my mattress would end up. Finally I managed to take it out of the bivy bag and in frustration I tossed the bivvy bag out of the hammock.

At about 11:30 there was a loud noise coming from the area where the barrel was hung. To my ears it sounded like a large animal pounding with two strong paws on an item that was not found in nature. I pictured a bear playing pinata with the barrel. I called out to LT and he heard it too. That was it for me. My nerves kicked into full gear. As a result of the nerves and the horrible indigestion, I had to get out of my hammock and make my way to the thunderbox at midnight. I sang all the way back to it making my presence known to any critters. There was a large spider taking refuge under the top as I opened it. The kinky chain was giving me a hard time, which didn't help. I managed to sleep from 2 to 3 a.m. then again from 4 to 5. I was glad to see the daylight finally dawn.

Oh, I forgot to mention. There was fresh bear scat next to where my hammock was hung. By fresh I mean it was maybe 3 days old when we got there. Here's a picture on probably day 5. 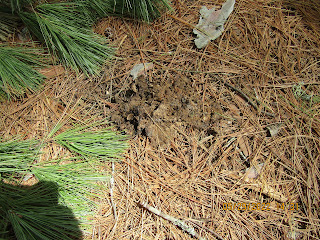