After a relatively sleepless night, we were up and LT retrieved a completely unscarred food barrel. I guess the bear was playing the bongos on someone else's food barrel. LT said it was just probably a raccoon. Yeah, a monster-sized one!

Next up was boiling water for tea and to rehydrate scrambled eggs and ham (plus peppers and onions). We also had bacon to reheat. This year I tried a different method of cooking the eggs by pulverizing the cornmeal before baking the eggs in the oven and then dehydrating them. I use a cookbook I bought online for most of my recipes and I love it. Chef Glenn. Here's a link to his site:

The eggs came out pretty good. Again I poured boiling water over the dehydrated eggs and left them for 45 minutes before cooking them up a bit on the stove.

I don't have a lot of pictures for this trip as I was using my Canon camera and it just wasn't handy while in the canoe, it was stored in my canoe pack. 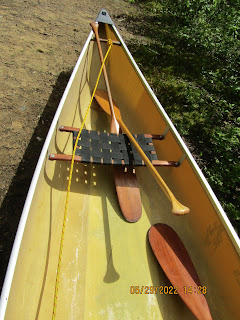 There was no rush to pack up and move just yet. We only had about 2.5 hours of paddling to do before packing up and heading home.

The weather was excellent for the weekend. The only rain was a few sprinkles around midnight the night before that didn't last long. The night before had been warmer.

It didn't take much to pack up. One positive thing about the canoe pack is that it has a lot of room, it's not so much of putting a puzzle back together. Especially as it didn't matter so much as I wouldn't have the pack on my back any further than from the site to the canoe.

On the way back the wind was hitting us at a 45 degree angle from the front right side. No such luck that we would get it from behind for a slight push. We navigated through the narrows of the train bridge without any problem. I had to keep an eye out for rocks on the way down the lake as there are a couple of spots where they are hidden just below the surface.

When we were on the way to our site a couple of days earlier, I refused an offer to stretch my legs as it felt like we'd only been in the canoe about half an hour. On the way back today I suggested a leg stretch at about the same point, one where there would only be about 30 minutes left to paddle. We stopped at a camp site and had a drink and a snack.

Back in the water and as we neared the access point the wind was picking up. Before the access point is a lovely beach that is for the car camping sites. I suggested to LT that if he wanted we could dock there and just skip the fight to get back to the access point. He teased me by steering straight for it. He's in the back and does all the steering. I struggle with steering when he takes a break from paddling. But it was just a tease as he then tacked out towards the middle of the lake again. It was just a strategy to prevent us from being parallel to the waves.

When we got to the access point we put in on the opposite side of the dock. There was quite a crowd landed already. Three canoes, six guys, three pickup trucks, all crowding the access point. We managed to load up and head out ahead of all three trucks even though LT had to go get his vehicle.

We stopped at Cobden at the Chip Pit. It's the first time we have stopped there and I would recommend it. I had a poutine which had cheese curds all the way through it. And a cold Coke. Nothing beats it.

We're looking forward to our next trip. It's in Killarney. I have never been there, but LT has had a solo trip there when I was across the pond in the UK.

I did have a major fail on this trip. Everything in my canoe pack was put into its own bag. I had a bag of miscellaneous stuff like my dishes. I tossed in a bottle of spray sunscreen. Oh, and it didn't have a cap. Yup, everything in that bag got completely sprayed. It was like being sprayed by a skunk, none of the smell seems to wash off, although the scent was more pleasant than a skunk, just slightly though. Lesson learned.