LT has had his eye on a particular bag at MEC.  He almost bought it before his solo trip.  When he got back from that trip, his talk was all around how to tweak the bag combination we are carrying.  Here's what he's considering:
It's basically an oversized fanny pack that costs $70!  Every time we're in MEC he asks my opinion and I hem and haw.  Seems crazy expensive to me, for a fanny pack!

I've been doing a bit of a clean-up in my spare bedroom and I found a backpack I bought at Value Village for a whole $6.99 (not including tax, of course).  My intent was to cut it up and use it to design a pet carrier.  The inside of the backpack had three full compartments and I wasn't able to wrap my head around what to do with the two extra sections, so it was just sitting there. 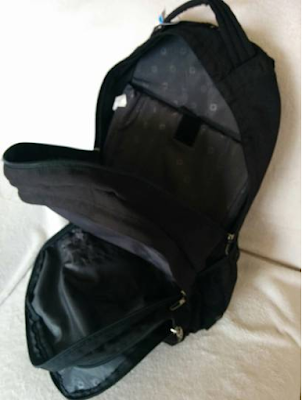 Yesterday I decided to make my very own oversized fanny pack with it.  Out came the scissors and the stitch ripper and I went to work.
I used the sidepockets on the outside of the bag as a guide for the smallest size I could cut the bag down to.  I made sure to cut the section with the handle on top of the bag to put it on the smaller version instead of cutting it off completely.

I only did one seam where I forgot to add one of the 3 sections of fabric being sewn back in place so I had to tear that out and re-do it.

Now the final version is not pretty and I would never submit it as an example of my finer sewing skills.  Some of the seams were mashed and stitched for strength, not beauty.  Here are a couple of pictures of the final product - side and front.  Notice that I kept the VV price tag on!  Probably to emphasize that $70 is too much for a glorified fanny pack!

I used the backpack straps to create a belt, now I just need to add a clip buckle.  Do you think LT will carry it instead of the pricey one?


LT had a couple of suggestions which I implemented.  I had taken the shoulder straps and sewn them onto the bottom tabs and needed to get a buckle.  I left the bottom straps in place.

He suggested I use velcro for the closure instead of a buckle.  That worked well!

Then he suggested I somehow put something in place to allow him to shrink the bag or tighten it front to back.  The bottom straps worked perfectly for that.  I took the buckles they had gone into from the top shoulder straps and sewed them onto the upper front section.  Pics below.