We had eggs and bacon for breakfast with two types of homemade bread, white and cinnamon raisin.  We didn’t rush, but we didn’t dawdle either.  We were up and ready to paddle the few feet to our first portage, 750 M, the longest we would have this weekend.  When we got to the other end, there was a family camping on a site right next to the muddy put-in.  They were on the move too and were monopolizing the shoreline.  We left our canoe and pack off to the side, out of the way, and walked back, thinking they would be gone by the time we finished our second trip.  Nope.

The family consisted of a hip guy with his two kids and his parents.  They were overloaded, I saw one of them carrying a Roots full-fledged rubber blow-up air mattress.   The daughter looked to be about 13 and not happy to be there.  The son was younger, maybe 11 and was the only one really carrying his weight on the trip.  The grandfather was insistent he was doing single portages only and he had what my father always called “a lazy man’s load”, which he struggled with, constantly stopping to rearrange his stuff or resting because he was carrying too much.  The only cheerful one was the chatty hip guy.  We got to know them as we leap-frogged over each other for most of the portages of the day.  At one point the daughter was actually in tears over something.

We managed to set out ahead of them on small Brigham Lake by about 5 minutes.  The next portage was 100 M and fairly quick to do.  We were in the habit of tying all the packs to the canoe crossbars each time we went into the water, in case we flipped the canoe.  I was being super careful, I wore my life jacket every moment I was on the water.  I have had a canoe mishap once before, a spur of the moment paddle in the Gatineau River with the spring run-off and ice floating in the water.   We were 20 minutes before being able to land, my partner did not have a lifejacket on, or even with him in the boat.  Anyways, this tying and untying was time consuming.
One more 440 M portage around the Brigham Chute, very pretty by the way, then we were in the Barron River with nothing but spectacular cliff faces to enjoy on our lazy meander down the river.  We let the happy family crew get ahead of us so that we could feel the river was ours and ours alone.  I took a lot of pictures and must have stated 5 dozen times how beautiful this was.  I’m going to have to expand my vocabulary.  Being able to see the Barron Canyon both from above and below, it gives you real perspective on its true beauty.

I'll let a few of the pictures I took tell the rest of the story. 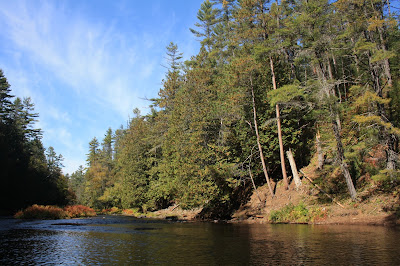 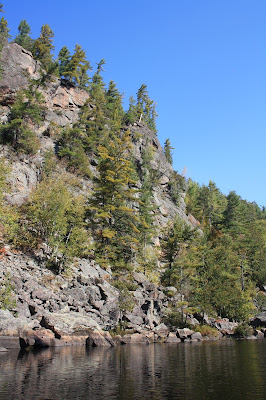 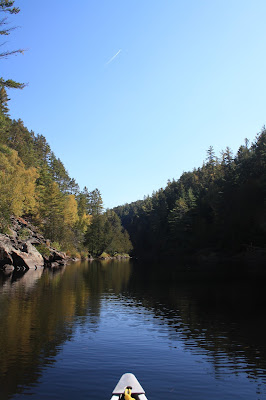 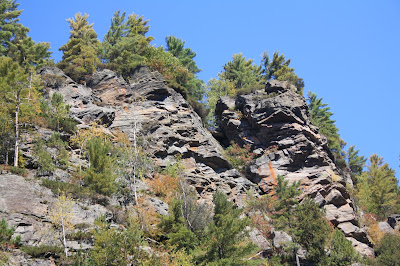 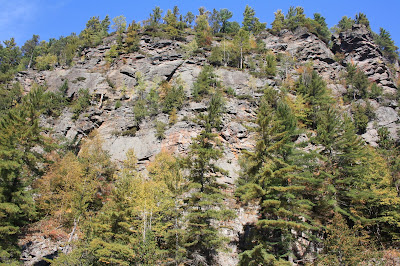 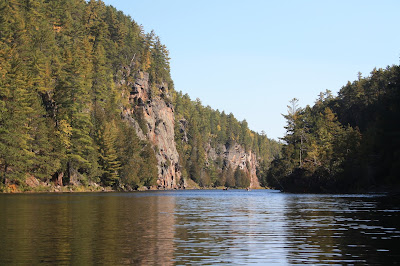 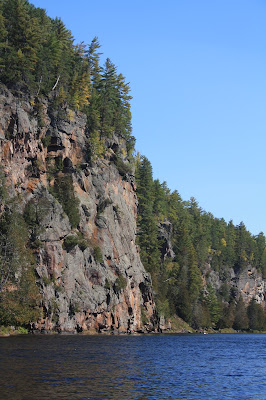 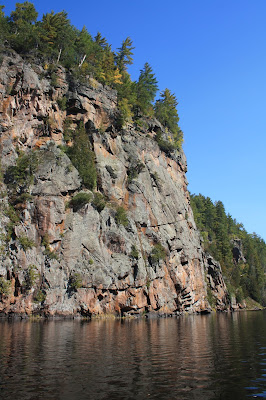 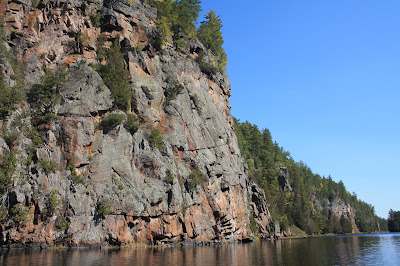 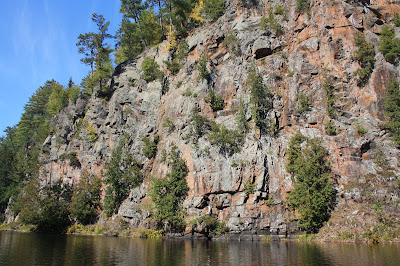 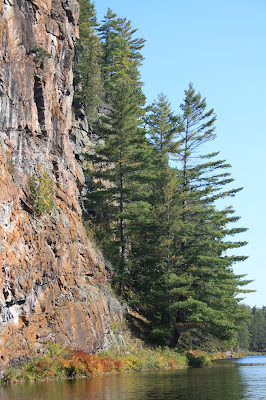 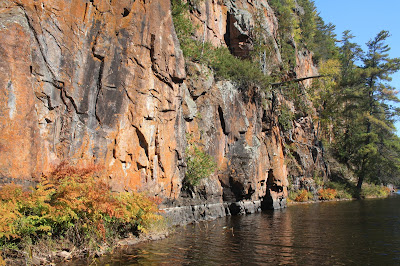 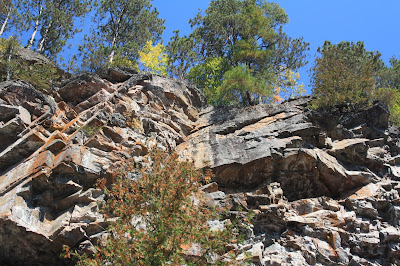 We stopped for lunch at an empty campsite once the cliffs had shrunk to regular shoreline.  I was disappointed at how little the leaves had changed.  I didn’t realize that this part of the park has predominantly coniferous trees.  I found a few red maple trees along this stretch and photographed them.
Before we knew it, we had our last portage, 345 M, and were at the Squirrel Rapids parking lot.  It had been another gorgeous day without a cloud in the sky, no breeze, warm, we could not have asked for a nicer day.  I said that we could go away this same weekend for the next 10 years and not get weather as nice as we had.  It probably only went down to 8 degrees at night, it wasn’t cold by any means.

We just made it to the outfitters before 4 p.m. to drop off the canoe.  We had such a good time, it was a disappointment to realize that the camping season was pretty much over for us and we’d have to wait what seemed like a long, long time before putting a paddle in an Algonquin Park lake again.