I tossed. I turned. I got up and went to the bathroom. Twice. Which leads to a big effort to get back into the double-bag sleeping system, on top of the narrow air mattress, without letting too many bugs in with you. I heard everything. Every twig snap, every loon call, every peeper peep. That first night it's tough to settle in and just relax. It was probably after 2:30 before I really fell deeply asleep. I could actually feel it warming up slightly around 2 a.m. I wasn't jumping out of bed too early this morning.

In fact, L.T. got up before me. I waited until I could hear him wander off to get the food bag that was hung north of our site. Our hammocks were on the south part of the site. Then I dragged my butt out of bed.

The forecast was for rain today and a lot of it. Up to 10mm of rain was coming. I had forgotten my hiking poles in the car when we were unpacking at the launch. And if we wanted to do a decent hike, we'd have to go out into the canoe to somewhere else, there were no trails accessible from where we were camped. 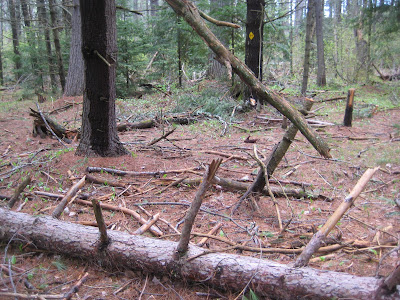 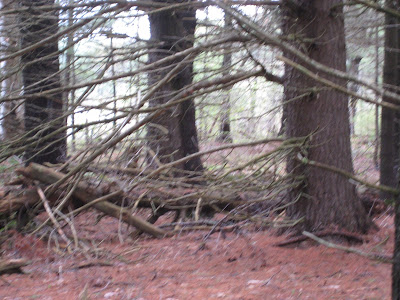 It was a slow morning. We were sharing the teabags as I had only brought 6 and L.T. had forgotten his. This was the only thing he'd forgotten, which is pretty good. Breakfast was fresh eggs and bacon. He had brought a half dozen so we ate three eggs each. He cooked three at a time and did not break a single yolk! We had brought along his pot set this trip.

I chopped up the potatoes and carrots from the night before and fried those up as hash browns. L.T. reheated the bacon he cooked ahead of time. We both like our bacon differently, so he cooks half the way I like it (less cooked and chewy) and half the way he likes it (crisp). And he buys the thick bacon at Loblaws, which makes any other bacon seem like lace.

It was probably about 10:30 by the time we finished breakfast. I did the dishes and we just relaxed for a while. The rain hadn't started yet. I didn't broach the subject of a hike. I wasn't feeling up to doing anything really strenuous after not sleeping well last night. And I know it would be harder for me to walk over uneven ground without my hiking poles.
Around 12:30 L.T. suggested we take a walk to the north of our campsite where he'd hung the bear bag the night before. It was on the edge of a field. We were camped on a site that had been a depot farm in the days when they were logging and using the lakes to transport the logs. Off we went, it wasn't far. We started wandering around the field. One of the first things we noticed were the abundance of raspberry canes. With this big open space, they had a lot of room to grow. Interesting. You know, I think bears like raspberries, right? And then we came upon a big pile of poop. Then another one. And another one. We saw about a dozen at least and some of it was more recent than others. Nothing steaming, thank God, but I'm pretty sure it was bear poop. I think I even saw some fur in a couple of piles.

We didn't really wander around much after encountering all that excrement. I asked L.T. if it was tempting fate to hang the bear bag that close to the field. His theory was that if the bear wanted the food that he could have it and he wouldn't have to go through us to get it. Point well taken. And if a bear did get the food, we'd just pack up and paddle back down the lake anyways.
We wandered back to our campsite and I started another fire. We kept it burning for a while. While we were sitting in the bug shelter I noticed some movement in the forest. A mammal of some sort hopped over a log then came to a stop when he spotted us. He quickly turned tail and ran. We didn't get a good look at him but after googling pictures of various animals that are in the area, I really think it was a fisher. L.T. thinks it was a skunk. He had a bushy tail and cat-like movements, and was about the size of a medium dog. 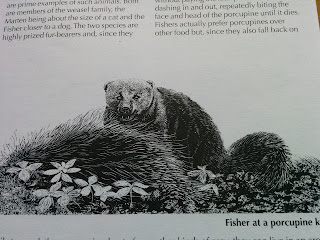 We also heard a nearby grouse trying to drum up interest. I'm not sure how far away he was, the low vibrations of his breast-beating were distinctly audible. We never spied him, but we heard his presence all weekend.

The rain started up and I decided to take a nap. I slept on and off for 4 hours. L.T. puttered around the campsite for a while then decided to nap as well.

I got up at 5 and started preparations for dinner. Tonight it was lasagna with savory cheese buns and pineapple upside down cake for dessert. First I boiled water and set the dried pineapple rehydrating in my Thermos. I put 3 cups of boiling water in a pot and added the dehydrated lasagna mixture I had put together at home. When we were ready to eat, I'd just heat it up again quickly. I made vanilla instant pudding in my metal coffee mug first with cold water and milk powder, then the pudding powder and put it aside to let it set.

The cheese buns were a recipe I made of buttermilk pancake mix, a dried egg mixture, some dried parsley, garlic powder and onion powder. I had vacuum sealed some cheddar cheese that I diced up into tiny pieces with my new Leatherman knife I had gotten for my birthday. I mixed it all together with some warm water and melted butter. I sealed the bag it was in to let the ingredients blend and possibly rise a bit.

L.T. got up and after we both relaxed for a bit, I started dinner. He had to make a trip out onto the lake to get more water. We fill a large bag with about 12 litres of water which we then put through a Platypus filtration system 4 litres at a time. We either boil water we cook with or use a Steripen to kill any bacteria in the water we drink. I notice he left without his life jacket, but he wasn't going far off shore. It can be tricky pulling up a fully loaded 12-litre bag of water from the lake into the canoe, it weighs quite a bit. 12 kilograms actually.

I had bought him an alcohol stove as a Christmas gift. He was interested in having one and thought that it would burn nice and slow, perfect for cooking baked goods in the wild. He took it out and set it up. Filling it was a messy affair, fuel spilled all over the place. It basically is the diameter of a Coke can, is just over half an inch high, with a trio of pronged legs that fold out. The center of the stove is a large dimple with a single hole in the bottom. The top diameter has various holes all around it. You just pour the fuel into the dimple and it slowly drains into the stove.

There are no controls with this stove. You light it and that's it. It runs at the one speed until all the fuel is burned. It takes 15 minutes if filled and it doesn't burn low. We're going to rethink another solution for baking, maybe even using tealights.

We used it to cook the buns and they got a bit burned on the bottom. I flipped them over and put them onto my own stove after I had finished using it for heating the lasagna.
The secret to cooking a lot of the dehydrated meals I create is to have a lot of time to let them sit and rehydrate. The longer they sit, the more they become just like they were before they were dehydrated. Some things take longer, like peas and celery, to rehydrate and can be quite chewy or hard. You'd never recognize the pineapple I rehydrate, that it had ever been dried. Starting that before even making dinner is the best timing for it.

The lasagna has in it: ground beef, cooked mini lasagna noodles, spaghetti sauce, mushrooms, corn, peas, carrots, red peppers, and onions. I usually add cheese when serving it, but this time I used the cheese in the buns.

The dessert was put together like this, we each got a serving of the pineapple with some juice, topped with the pudding, then dried angel food cake gets added to the bowl with a topping of shredded coconut. Yum!

The previous night's dessert was banana nut bread pudding. I rehydrate the bananas, then add dried Italian bread crumbs (and small chunks) with chopped walnuts.
It was raining pretty heavily now. The fire had gone out when we were napping and the pit (and wood) was too wet to start another one. I was tired, despite having the nap, and felt chilled. It was below 10 degrees again tonight. I just wanted to cocoon myself into my hammock so I went to bed around 9 p.m. L.T. followed me. We chatted back and forth a bit, but I soon fell asleep.