We were prepared for the bugs. Did you know you can get a camping weather report that also gives you a bug report? Here's what it looks like: 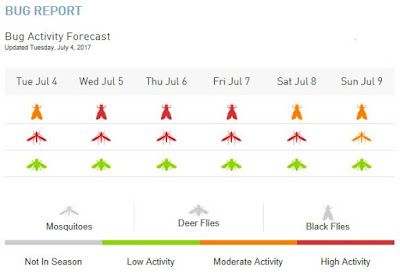 For our weekend it was showing red for black flies and mosquitoes and green for deer flies. Preparation included carrying multiple bottles of Watkins bug repellent. We both carry a pump spray bottle and the cream (which I think is more effective). L.T. had a new spray he was trying out that was less toxic. I brought a new box of mosquito coils. And I carried the Thermocell with 2 butane cartridges and 4 of the strips. We both had bug hats, I wore mine pretty much the whole weekend, except inside the bug shelter and my hammock.

Conclusion? We're still both covered in bites. And the deer flies were out. I would have rated them just at the bottom of high activity. They will follow you out of a portage and join you in the canoe, sticking with you for the full paddle. I was wearing thick wool socks with my Keen sandals and they can very easily bite through wool, my ankles are the witness.

We've taken the mid-June trip off our schedule this year because of the intensity of the bugs. The Canada Day trip might go the same way.

As mentioned in the timetable post, we set off on our drive, got our permit, got to the access point, loaded the canoe and set off at 10:30 a.m. We had a long paddle down Cedar Lake.


We made good time going across the lake to the first portage point at the southeast part of the lake. We landed around noon. The lake was kind to us and wasn't very choppy. There wasn't really much of a breeze. The weather was ominous though. The forecast had said rain would start around 10 and by 2 we'd be having thunderstorms.


The first portage goes around the Petawawa River rapids called Cedar Lake Rapids. It's a nice landing; there are two campsites at this portage end and they're not bad if you don't mind some through traffic. The second one is particularly nice and looks out over the waterfalls (although I didn't take the time to have a close look). The first portage isn't too bad. It starts off quite nicely, there's one boardwalk over a creek, then it does get hilly and rocky. The Petawawa River is mostly in a gorge. The sides are steep and rocky, which makes for portages that involve going up and down with lots of rocks and some pretty steep put-ins and take-outs.

The portage is 960 meters and puts in below the last of the rapids. The sides of the river are high here and a couple of streams gush into the river. It's hard to see them though, the mouths seem to be protected by trees. The current is pretty strong if you chose not to paddle too heartily, you'd eventually get pushed to the next portage take-out. We did paddle though. The water was really dark today, the dark skies contributed to that.


After paddling about 1.5 km we were at the start of the next portage, 685 meters going around Surprise Rapids. Taking a rest on the portage with the bugs so furious isn't much fun. I was finding my bag a bit heavy so L.T. suggested we double-carry this portage. For the first trip I carried my fanny pack and the lunch backpack. It was an up-and-down portage, rocky, and shortly after the starting point, there was a muddy, swampy section about 5 paces across. For our first trip through, I bushwhacked around it, still getting my feet wet. Ick. We got to the end, it's a campsite. A really bad campsite. But I'm sure it's there to help people that aren't making good time and really need to stop and just stay somewhere for the night. It's a big rock with maybe only one flat grassy spot about the size of a pup tent.

We dropped what we were carrying and retraced our steps. Again I did a loop through the undergrowth to go around the water on the trail. I picked up my backpack, fit my hands into my trekking poles, and started the final trip on this path. My poles have a harness on them where my hands fit and they are velcroed in. When we got to the wet section, I tried my circuitous route and as I ducked under a fallen tree, my backpack got stuck. I tried to wiggle lower and lower then fell onto the log below on my stomach, both of my trekking poles collapsed into half their size in front of me while getting wedged into the muck below. One forearm also ended up in the mud. L.T. had to come over and help me out. With both hands locked into the poles I had no ability to extricate myself.

It had started raining too. This was a miserable portage. As we got to the end, thunder and lightning could be heard. We decided to wait it out a bit then the skies opened and it just poured for 15 minutes. We were both drenched completely through right to underwear. Finally L.T. wedged the canoe into a Y in a tree and we stood underneath that. We were getting a bit concerned about the time, so we set off while some thunder was still rumbling in the distance. At least the rain had stopped. We had eaten some of our lunch during this wait. One bonus of torrential rain, the bugs weren't able to fly around.

There's not a very far paddle to the next portage, probably half a kilometer. A train bridge comes into view and a stoney path up the side of the hill leading to the train bridge is visible. The real portage is about 50 meters further. We took the train bridge route. It's a serious straight-up scramble. This portage goes around Devil's Chute Rapids. And there's a section at the end called "Five Man Grave". I was very glad we were going around this section of the river!


NOTE: Algonquin Park does not recommend using the rail bed for portaging.
L.T. cut me a break and I just climbed up to the rail bed with my life jacket, the lunch and my poles. He brought me my pack. He made a second trip to get the rest of the gear and the canoe. I put my backpack on over my brand new rain poncho that has some sort of silicone coating. That was a bit of a disaster. Between the fanny pack flipped around to the front, the big backpack with my life jacket, the lunch bag and my camera bag attached to the back, would not sit properly on my hips. This is important to distribute the weight evenly. My shoulders were taking all the weight instead of my hips and the pack was slipping around a lot.

The majority of this informal 860 meter portage can be done on the tracks which is much easier than the down and up of the portage. Where that portage crosses the tracks, we had to turn onto it, off the track. But not for very far.


Once the last portage was done for the day, the rest of it was just paddling. We had about 6-7 more kilometers to paddle and the current was going in our favour. The water in the river was so calm that as we turned a corner into a long, straight section, we had trouble figuring out what we were looking at. For example, a large rock outcropping looked almost like you could paddle under the rock reflection. A large tree root was sticking out of the river as well. From the distance it looked like jawbones of some huge shark.
We got out onto Radiant Lake, there are a few cottages at the mouth of the river, lucky folks that have those. There are 5 campsites along the top of the lake, we were hoping for the 3rd site. It was occupied. We decided to go to the 4th site. L.T. had been on the 2nd site on a previous solo trip and he said it was nice. But the 4th site might have a sandy beach, so we pressed on. The 3rd site is probably the best with a real sandy beach. The 4th has a sandy bottom with a pebble-filled beach. Still not bad. We landed around 5:30 p.m.

The site has a lot of straight red pines on it. They don't have a lot of lower branches. The sun was starting to peek out onto the site, there was a good spot to put the bug shelter and lots of trees to hang hammocks. We were home for the next 2 nights! The first thing we did was hang that bug shelter.
When I opened my bag I was in for a rude awakening. Everything that was not in a dry bag was wet from the torrential downpour, including my air mattress. Oops! Lesson learned there.

Later on when L.T. was hanging the ropes and pulley for the bear hang, he could hear a fairly consistent peeping noise that he was struggling to identify. He followed the sound until he came to a hole in a tree. Ah, a nest of baby birds of some sort. He backed away and the local woodpecker came in to protect her babies.

Breakfast - L.T. made scrambled eggs, bacon, cheese and grape tomato wraps to eat in the car.

Lunch - L.T. prepared various deli meats, cut up some delicious old white cheddar, and had cut apples with plums and grapes. He also packed some crackers in his Thermos with some brie. But with the rain downpour we skipped that portion.

Dinner - L.T. had brought a fresh steak and veggie meal for tonight, but we were both too tired to go look for wood to burn. Besides with the rain, most of the dead fall would be wet. Instead we had Sunday's dinner which was deep dish pizza with rehydrated veggies, basil and garlic pasta sauce (also rehydrated), bacon, pepperoni and cheese. Dessert was raspberry fruit crisp (rehydrated raspberries, a bit of sugar and granola topping).

After dinner as we were sitting in the bug shelter, a whippoorwill sounded its call as it flew by. The park is recording sightings (or hearings) of that bird to try to get an idea of the population and where they are hanging out. We didn't hear many loons though.

Today was Canada Day and for our homage to being Canadian: we were out in the Canadian wild and as for wearing the Canadian colours, we were both white-skinned with red bug bites. For fireworks we had fireflies flickering around the campsite. And there were no line-ups anywhere, even for the port-a-potty at the back of our campsite, unless bugs count.

When the going gets rough, the camera stays in its bag. I did take lots of pictures of the campsite on Sunday. Here are a few pictures: 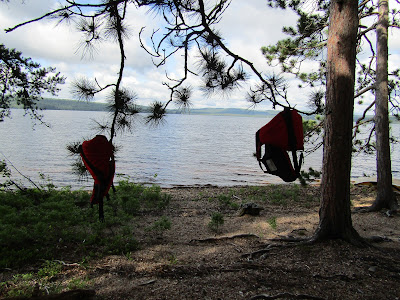 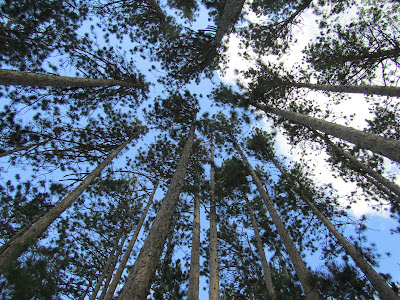