Today dawned totally gorgeous. It's always nice out when you're going home. We would spend the day travelling, so I was fine with having good weather. We had discussed our strategy the night before and set 8 a.m. as the wake-up call. I didn't have to convince L.T. to get up, he was up before me. I waited until the last minute before 8 to get up as well.


Breakfast was blueberry pancakes with bacon and maple syrup. I think I've finally figured out a system to mix the batter, blueberries and warm water. I use one of my Food Saver bags and vacuum seal it, leaving a large space to fold the bag over multiple times at the top, clamp it with my windshield bulldog clamps. We squeeze the ready pancake mixture out of a small opening in the pointed end I've created with the vacuum sealer. Now that I have that long silicone spoon, no more messy hands!

We had skipped lunch yesterday, so we decided to make it this morning and put it in our Thermoses to eat on the route. I had also brought bacon and pepperoni to go into the Kraft Dinner. We were able to get most of the pot into the two Thermoses, but had to throw a bit out. 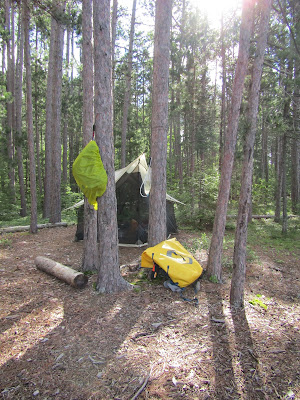 It takes a while to set up camp and a while to tear it down. The hammocks need to come down. The bug shelter is last. I had decided that my fanny pack was NOT going to be used today, I was going to stuff every last item I could into my backpack including the empty fanny pack. The only things that would be attached to my backpack on portaging was my life jacket and camera bag. I stuffed my snack bag and my one liter bottle into the side pockets of my backpack. I only filled one of my bottles, the other one would be empty. One kilogram less of weight!

Just when I thought my backpack was stuffed to the max, I realized I had to still fold up my chair and put that in my bag. Dang! My backpack has a really cool feature. It has a front zipper in a U-shape. If I lie it on its back, I can open up the front like a suitcase and jam more stuff in that way. I got the chair in. I was carrying the garbage (which I normally don't do), but I balked at the little backpack it was in. L.T. had some black plastic construction-weight garbage bags in there and they were heavy!

It was 11:35 by the time we launched. Radiant Lake wasn't horribly choppy, but it wasn't flat either. And the wind was blowing directly in our faces. It took about 35 minutes to get to the mouth of the Petawawa River. We were going upstream today and it was moving faster than it looked. The first part of the river is a long paddle and with each twist of the river, the wind would blow at us again. I was anxious about today. I had had such a rough time on Saturday. And today we were going uphill and against the current of the Petawawa. We knocked off the first portage and my confidence built a little bit. We did single carries all day. Some of the wet spots had dried, but not all!

The next portage with the big mud swampy section in the middle, well, I had decided at our first portage that my feet were getting wet, so I had stood in the river holding the canoe at the bottom of the train bridge. They were already wet, so I could walk in the muddy section. I used my trekking poles to ensure there was some rock below the mud and water before stepping and that worked fine. I would not attempt to find a route around this again!

On that second portage we came across a blue canoe bag three-quarters of the way up the trail. I could hear someone in the woods to my left, between me and the river. There had been no indication that someone else was on this portage, no canoe or kayak when we started our walk. When we got to the end, there was no boat either. I guess this person was either trying to do some of these Category IV rapids or was lining their boat, not an easy feat. Actually he probably had started doing the rapids and changed his mind. He would have to haul his craft through a bushwhack up the steep sides of the gorge. Yikes!

We got that portage done, then we came to the final one of the day and the longest. But it's not really the toughest. Although to start you need to walk along the edge of the bank which is high with loose gravel rocks. It would be nothing to slip and you'd fall the whole distance into the rapids. Hardly a tree to impede your plunge into the rapids. Not a pleasant outcome. I was extra careful on all portages today. Slipping could mean hurting myself badly and I have no idea how L.T. would get me out of there. The bugs would be happy though to keep me company.

The trail gets a bit nicer as you get to the end near Cedar Lake. We walked by the first campsite, then came around the corner to the campsite right on the lake. There was a small creature there, he kind of looked like a fuzzy beaver or ground hog with a fuzzy tail. He didn't look like an adult, maybe a young adult? He was dark brown with a bit of black. I surprised him and he started to go around me until L.T. came into view. Then he just froze. We didn't try to approach him, we just stopped and let him run away.

We dropped our gear and took a break to eat lunch. I walked into the lake and got completely wet. It was mostly to cool down. The wind blowing off Cedar Lake would dry me out before I got back to the access point. The KD in the Thermoses was good. After eating that and drinking, we headed out to conquer the big lake that is Cedar. L.T. plotted a route that would bring us behind one of the big islands to give us a break from the wind and waves. But for the most part we had to battle them. They were enough to pick up the front of the canoe and slam it down into troughs that were probably 1.5 to 2 feet below the crest of the waves. At times I had only air to paddle.

It was a long, tiring trip to paddle across Cedar. No matter how far you thought you'd progressed, when you checked the shoreline, it looked like nothing. But progress we did. Then Cedar had her ultimate revenge on us. We paddled into the small bay at the access point. It was suddenly calm. Yeah, because we're in a bay. NO, the whole damned lake was like glass all of a sudden!

Oh well, we had made it safe and sound. There was a group of people picnicking on the beach. I had full intention of getting out of the canoe and just lying on my back on the beach when we arrived. But I didn't want to embarrass L.T. My lower back was killing me from the paddle across Cedar. Instead I just got the gear ready to pack into the car.

By the time we loaded up the car, got the canoe on, and L.T. changed into clean clothes, it was 6:30. 7 hours from when we had launched from our campsite.

On the way home we needed to get gas and the requisite fries from the chip truck. We had to drive into downtown Deep River as we were too late for Freddies on the highway. I had a small poutine, that I ended up sharing and L.T. had a bacon cheeseburger. We got to his place at 9:45 p.m. By the time I was home 45 minutes later, I just climbed the 3 flights of stairs leaving that huge bag in the car.

1. If I don't want something to get wet, it needs to be in a dry bag or at least a Ziploc bag.

2. I need to wear better shoes on the portages and I need to suck it up and spend the day with wet feet. Part of the reason I wear the Keen sandals is that they are light and I can use them in the campsite, ergo no extra pair of flip flops or camp shoes to carry.

3. We need to pad the times given on Jeff's maps to compensate for my slowness on the portages.

4. I brought my new Esbit stove (see here for my testing of it). It was easy to pull out and heat the pre-cooked bacon on while either the eggs or pancakes were being made. I used my stove diffuser on it at first, but it didn't really blacken much without the diffuser.

5. I should probably carry a maximum of between 35-40 pounds on my back.

6. I hate fanny packs. I can't get my backpack hip belt to work properly while also wearing a fanny pack.

7. I can't wear my new rain poncho under my backpack (I might be able to wear it over, which would be better as it'd keep my bag dry.

8. L.T. will never play cribbage with me. Although the board worked great as a place to put the mosquito coils (yes, plural).

9. I can climb up much better when fully loaded using my trekking poles than I can going down.

12. Deer flies can bite through thick wool socks. On my trip back on Monday I put Watkins cream on my bare feet, put on my socks, then sprayed them with Watkins bug spray. That helped a bit.

13. I need to get back to exercising on a more regular basis, including weights.

14. I would only do this route again if I was carrying 25 pounds and had guaranteed nice, sunny weather! (Ain't gonna happen!)