When planning to go backcountry canoe camping you select each item you are going to bring based on weight and mass. Tossing this, that and the other thing into your backpack can really add up. Not just in how heavy your bag gets, but how much you can fit into your bag.

I carry a 75 liter pack - that's the space measurement. I could not carry 75 liters of water in that pack, that would be over 150 pounds, phew! Maybe they fill 75 balloons the same sized as ones filled with a liter of water then fill the pack to measure its capacity. LOL
When I first started planning to camp two years ago I was keen and weighed each item I was putting into my pack. This post is a great opportunity for me to update that list as I've certainly altered what goes into my bag.

See here for a description of all the items I carry in my bag.
Here goes (all items with an asterisk * vary in weight from trip to trip) sorted from the lightest item to the heaviest:

The total weight of the above list is: 30.710 kg which is equal to 67 pounds and 11 ounces. I have estimated this load based on a trip of 7 days, so that would be the heaviest I would carry. Also because some of my load is food, as the trip progresses, my load lightens by a kilogram a day.

My new Cabela table is not in that list. I would not be able to fit it in my backpack, and it's too heavy to bring on a long trip. I might not bring my air mattress on a warm weather trip, it's pretty heavy as well.

I have to give a lot of credit to my backpack, it's pretty amazing at distributing the weight and making this load comfortable to carry. I even took it on a 12-km hike to carry my water, lunch and snacks, as I don't like a fanny-pack style waistband cutting into me while hiking. There's a hip band that swivels, I can hike up the backpack higher and my hips take the weight for a change. There's a moveable chest strap holding the shoulder harness tighter in the front, I will put my hands on that to help carry the load also for a break. And I couldn't do any of this carrying without my trusty walking poles!

When I get home from my camping trips, my final carry is three flights of stairs up to my apartment. That's the only time I wish I had an elevator.
Posted by Cici Canoe at 12:05 PM No comments:

Enjoying yourself out in the backcountry happens when you're prepared. You're prepared if you've planned well. And planning requires a checklist.

There are multiple places online where you can download someone's version of their checklist of what they need when they go backcountry canoe camping. It's a good place to start, then you improve it by adding your own gear that you bring and feel is essential to a good trip experience.
I recommend printing out your own checklist and using it when packing. Get a pen and cross those items off the list. Or you might forget something essential. It happens.

Here's a list of each individual item that I usually carry:

Here are some of the things that LT carries besides the same personal items that we both need:

Posted by Cici Canoe at 8:40 AM No comments:

It was another peaceful night although it got very, very cold. It probably dropped to 5 or less. I have a mini thermometer and by the time I got up around 7:30, it was reading 7 with full sun on the site. Brrr. I hadn't been cold in my hammock on any night but that was dependent on being in my sleeping bag and liner properly and being on top of my mattress (any wandering limbs would immediately know they were off the mattress). LT was also cozy in his hammock. He had a new air mattress he picked up on Friday from MEC.

This morning's most rousing bird was a woodpecker that I swear was on the same tree my hammock was hung on. He didn't hang around long, just enough to wake us both up.
Something both of our campsites on this trip had in common was a latrine that was up a very steep hill. I had to use trekking poles to get to the thunderbox on both sites.

Here are some pictures of the bug shelter set-up:
Breakfast today was dehydrated eggs with red peppers, onions, and dried canned ham. And bacon. I added a mozarella cheese string to mine. 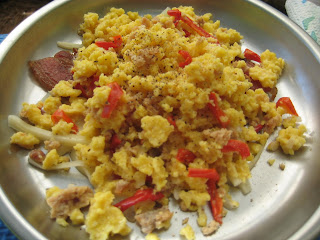 We didn't rush today to pack up. We didn't have too far to go. It would be a leisurely paddle and only a single, flat portage.
On our last bit of Little Cedar, we were weaving through some small islands when we surprised what I think was a wolf on one island. I didn't see his head, but I saw from the neck down and at first thought it was a fox, but it was the wrong colour and it didn't have a fluffy fox tail. He was a brindle colour, grey and dark brown. The wrong colour for a coyote as well. We quietly spun the canoe around for a better look, but he'd disappeared along the side of the island. We then heard him splash loudly into the lake as he jumped in trying to get away from us. 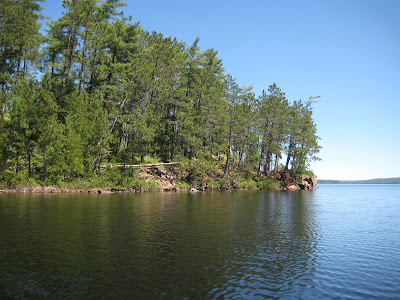 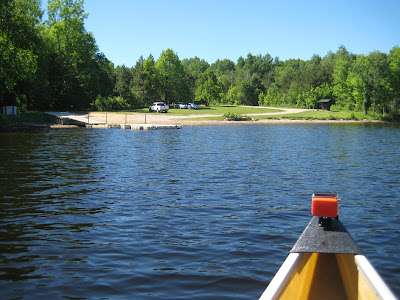 It took about 4 hours to get home, including the requisite stop for poutine in Deep River. We compared bug bites and LT definitely won for both quantity and size. I would prefer to lose this contest anyways.

Last night was very quiet and calm, peaceful and almost silent. However the birds started up very, very early. A crow decided to zig-zag through the woods behind us and caw very loudly for a while.

We had been able to set up the hammocks first try yesterday.
Once LT got up and fetched the food bags for me (sometimes I'm too short, also, I avoided being involved in the hang on this site, so I didn't even know where it was) we had breakfast. Today it was blueberry pancakes with bacon. I have a tube from Nalgene that I put the butter in and the first job of the morning, after making tea, is to soften the butter enough to get it out of the tube.
The following are some shots of the lake from our campsite: 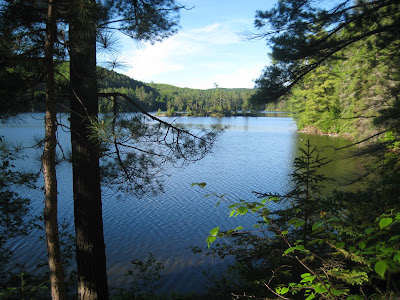 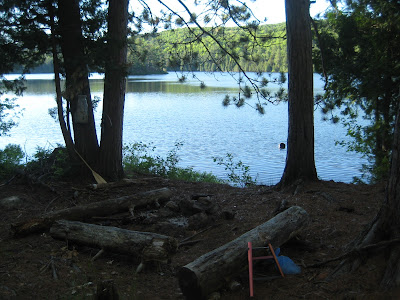 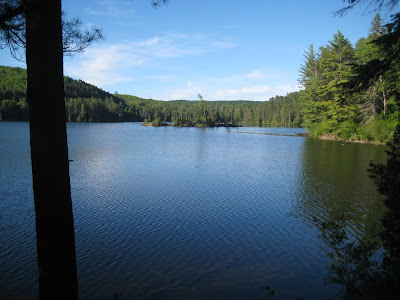 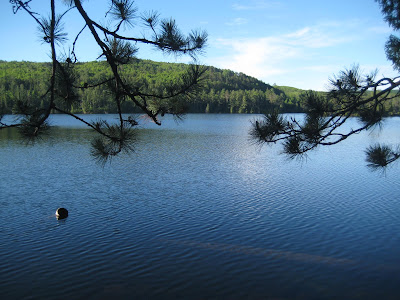 Today's schedule? Nada. We decided to paddle over to the island to check out the site in case we might use it in the future. Here are the island pictures: 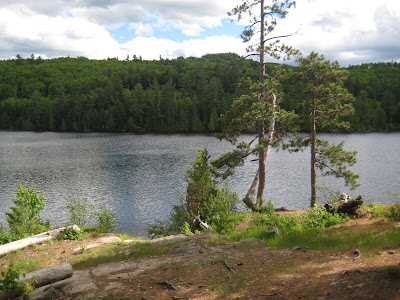 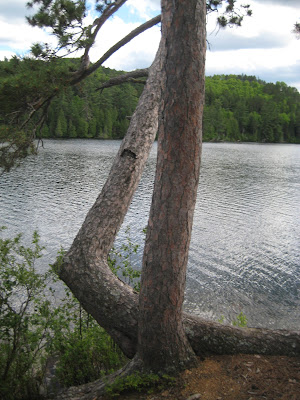 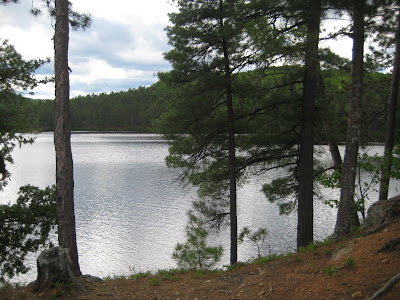 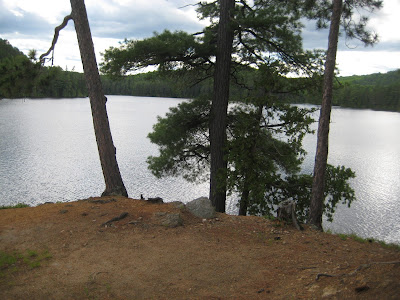 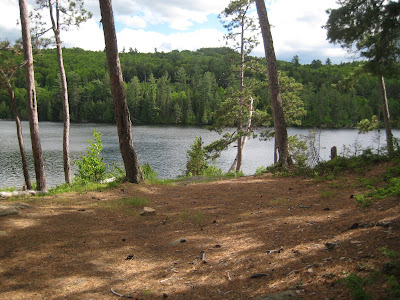 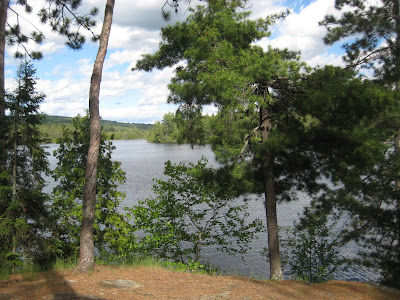 It's a nice site, lots of room to put tents, not as much for hammocks. The trees were mostly hanging off the top of the cliff into the water. A bit dicey in the dark getting in and out of the hammock tied on those trees.

We paddled back to our site and I had a nap. After that I started on dinner. We had lasagna with savoury biscuits. 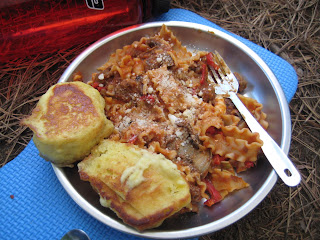 Dessert was a new recipe, Banana Cream Puffs. It was made with rehydrated bananas, banana pudding and dried angel food cake, YUM!

It had been a very blustery night. The winds sounded so strong, I was worried that we'd get blown away overnight. I didn't sleep very well with the noise waking me up every half an hour or so.

It wasn't raining, but the wind was still blowing....in our faces. It would be a tough slog to pack up and head into it to get to Mink Lake today. We've been on Mink Lake before and with the wind coming in this direction, it would be blowing directly down that lake too.

We were staying put for the moment anyways. It didn't look like a good idea to venture out on the water.

Breakfast was made, fresh eggs with bacon and hash browns. I also made our lunch for the day in the thermoses, a new menu item. Tortilla soup with dehydrated chicken in it.
Shortly after 2 p.m. we made a decision. We would not press forward to Mink Lake, we would turn back and head to Laurel Lake, find a spot there, and just sit pretty for a couple of days. We did not have reservations on that lake, we were scheduled for Mink Lake for tonight and Little Cauchon again for tomorrow night. We had not encountered a single canoeist on this trip so far and tonight was Sunday. We would not be putting any other canoeists off their reserved lakes, no one else seems to be crazy enough to travel into the park when the bugs are so bad.

Once the decision was made, we tore down and packed our gear and headed out on the lake to take advantage of the breeze that would push us down the lake. We were on the water around 3. It took very little time to be portaging back into Laurel Lake. 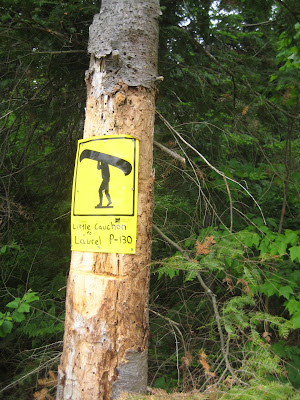 We checked out the first campsite, it was high up, facing the portage we were coming out of. There didn't seem to be much space and the access to it was poor. Next. At least this was a small enough lake that if we got out and inspected each spot, not happy with the last one, we could double back and go to the best spot.

We checked out the second campsite. It didn't have enough room, we could tell from the shoreline.

We checked out the third campsite. We landed and walked around it. It was nice enough, but we couldn't figure out where to place the bug shelter. The bug shelter is essential to travel in June, but it presents its own problems. We can't place it too close to the firepit if we're having a fire, it needs a relatively flat spot as we're cooking on stoves inside the shelter and we spend most of our time there when not sleeping, and we need two good trees to support it (no poles with this baby).

Next. We checked out the fourth campsite and decided to take it. There is also an island campsite, but with our experience of the wind from the previous night and possibly extending into tonight, we chose to stay out of the direct line of it. We'd covered about 6.5 km today.
Tonight we'd be having the steak dinner cooked on the fire. Once the bug shelter and hammocks were set up it would be time to get the fire going. Having a fire is a lot more work.
LT built a fire after sourcing some wood in the nearby forest. Once the logs had burnt down into coals, he put on the steak and and potatoes both wrapped in foil. We were so hungry, I forgot to take a picture. Considering I had dropped my steak on the last trip, my main concern was to hold onto this one and devour it as quickly as possible. It was even more delicious than the steaks he'd made in May. Last time he let the butcher season the steaks and he'd been a bit heavy-handed.

However, I do have pictures of the birthday cake I baked on the stove. It was a tad burnt on the bottom, but I heaped on chocolate icing I had whipped up at home to distract from the burnt part. 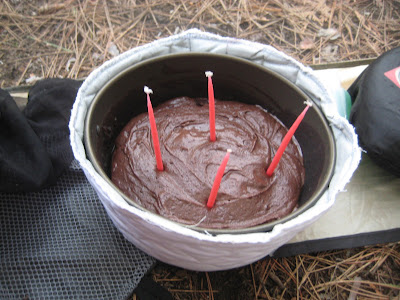 Tonight was looking much better than last night. I was eager to climb into my hammock, but we didn't check in until 11 p.m.