It's been a while since I've been out in Algonquin Park. This trip was just an easy-peasy foray into Cedar Lake. The initial plan was to revisit the campsite we'd been on a few years earlier on Canada Day. It is a lovely beach site near Acanthus Station. However, as you can see by the black lines outlining our paddle on Friday, we did not get the campsite we were aiming for as someone else beat us to it. 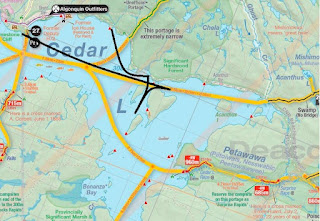 Back to the beginning. LT's canoe is in for repairs at a business near to Ottawa. It's not far off the highway heading out of town in the direction of Algonquin Park. They were kind enough to loan him a canoe for all of the trips he made this summer. LT made a special trip out to their location to pick up the loaner before our departure day. We were given a white canoe that had definitely been on many trips. It's a different shape than the canoe we're both used to. Well, especially me. I had some difficulty adapting to it. Also Cedar wasn't awful on Friday, but it was flexing its muscles a bit and the wind was making its presence known. I named the craft Tippi Hedrin, hoping deep in my heart that she wouldn't.

We paddled as close as we could to the Acanthus site, noticing on the way that the one campsite we'd passed near it was already occupied. As far as we could determine from where we paddled to, our desired site was also occupied. No surprise, it's Canada Day weekend and we were a day late getting out into the park.

We aimed towards the island campsites to check them out. Also occupied. We knew at that point there was going to have to be a lot more paddling to check out other sites so we decided to go back to the very first campsite we'd noticed on our way in very close to the access point that was empty. We were in luck, it was still empty!

The campsite is really nice, it's very elevated and amongst lots of pine trees. However the elevation was a bit tricky getting up to. And the thunderbox was on the opposite of the hillock we were on, so again about a 20 foot climb down to it. The hill going up to the campsite was so steep I had to get help to bring my bag up the hill.

It was a very uneventful, relaxing weekend. No big hikes or portages. As I am writing this almost a year later I can't even remember what we had for meals. I would assume they were mostly fresh food. I did take a few pictures.

We even managed a swim. While we were floating in the water a couple paddle by in a canoe with two small children. By now it was pretty late to be starting a trip out on the lake, probably well after 2 p.m. The woman inquired as to whether we were on a campsite and we said yes. Then she said that she thought we were on her campsite as she'd reserved this one. Well, that's a good try, but at this point there are no reservations of a particular backcountry site in Algonquin Park. I was worried about them going off in the direction we'd gone so late in the day with small children as we knew there wasn't much open. I don't imagine things went well for them that day. 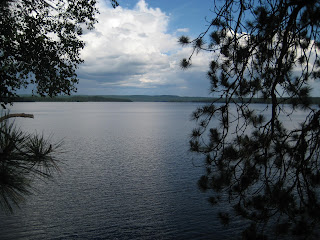 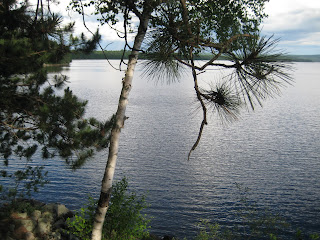 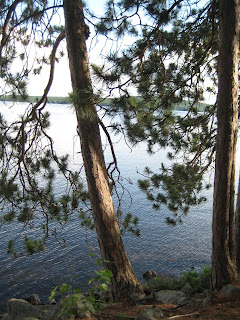 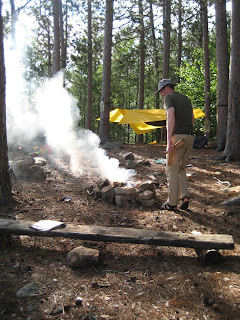 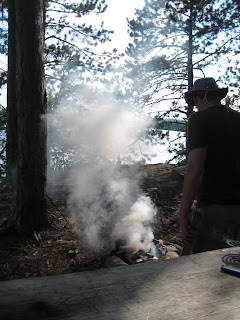 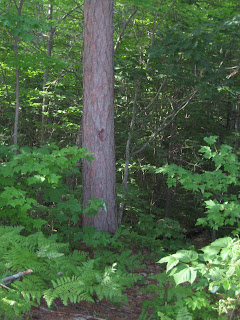 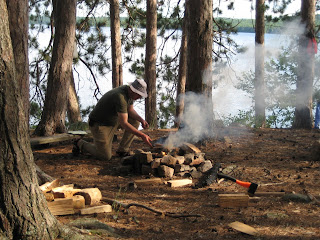 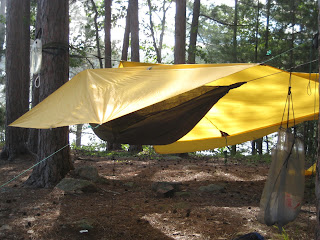 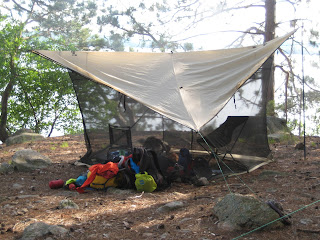 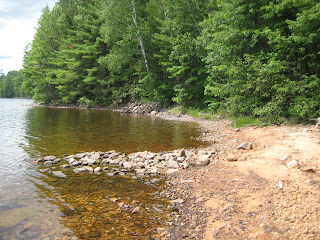 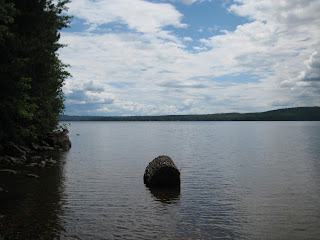 Our paddle out the next day wasn't very far. Getting back into Tippi made me a bit nervous, so I was glad the destination was close. This was a good trip to get our feet wet.
Posted by Cici Canoe at 2:36 PM No comments: