The Outdoor Show was disappointing this year. Not that I begrudge the hunters and fishers their sport. But having them as part of the show this year meant that most of the floor space was taken up with boats with big motors, a whole corner of just fishing rods, another large section of ATV's and even some guns. Really, I can't blame the organizers. Those sportsmen spend a LOT more money than the average backcountry camper.

We got to see Kevin Callan and Becky Mason give their presentations. She talked about the making of her father's famous movie, "Paddle to the Sea". She had one of the carved "Paddles" that was used in the filming.
Kevin talked about his canoeing/drinking trip in Scotland. They paddled down a river that had a bunch of distilling plants nearby. It sounded like a hoot, except for the time of year meant the sun set very early and they even had to run some rapids in the dark. Scary! The link below goes to his videos about the trip.

Click on this link to see his videos about the trip

I bought a pair of wool socks. L.T. finally bought some of the dried meat from the vendor we see every year. I got an inflatable pillow from Eureka! But that's about it.

We walked around each area at least three times. It's surprising that the Algonquin Park outfitters are a no show. You'd think they'd use the event to promote their services.

There was one canoe manufacturer. He had a sweet small canoe that L.T. could use for solo tripping. But he's not ready to commit to storing a second canoe in his backyard just yet. Here are the details anyways. It's a Pilot, 12' long weighing 42 pounds made out of kevlar/carbon with ash trip. It was originally designed to fit on the side of a float plane. It claims to be stable and easy to paddle. Check out a video on the Pilot here. In Ottawa you can get one through Expedition Toys.

Eureka! has a new version of its bug shelter. The new one is a one-piece version. Our is two pieces, the tarp and the net shelter that clips in. I really thought L.T. would be interested in buying the new one, a larger one that what we have already. He could then take it on trips of more than 2 people. He's gone out with 4 before. But on second thought, we really like the way the two-piece version works and if he does want a bigger one, he can get that one eventually. They do make the two-piece version in the 2 sizes.

L.T. splurged on a slice of chocolate peanut fudge for $10. I decided to make him a batch for our first camping trip. No charge.

L.T. eyed up a new saw. There's nothing wrong with his saw. But this one looked lighter and it set up a lot quicker. He didn't buy it though, and he sort of wished he had as we perused the aisles of MEC the next weekend.

And to end on a positive note, here are a few pictures from previous shows:(there was no pool this year either) 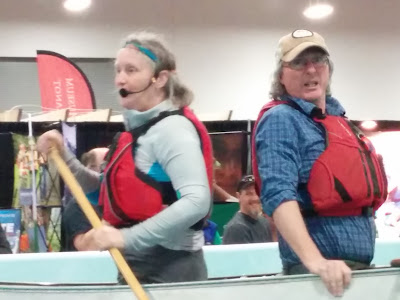 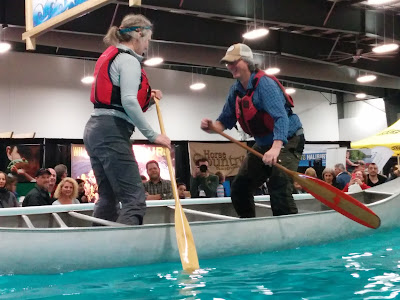 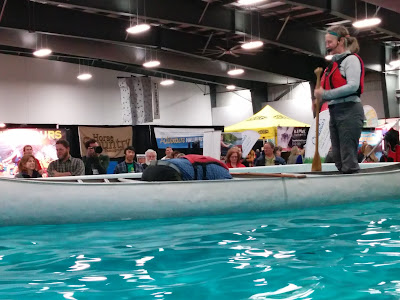