Goldilocks and the 8 chairs

Yes, you read that right. We've had eight different chairs come along with us on various trips. To be fair though, the first two were ones I had and were never meant to be taken on a backcountry camping trip. I had them for regular car camping when my son was young. On our first trip (September 2013) we didn't buy much gear. I can't believe L.T. carried both of these as well as a bag of firewood and 6 litres of water over all the portages! And I think one of these chairs bent during our trip. I'm not sure if it was me or him, but that chair was ready for the garbage after that.

L.T. has always maintained that a comfortable place to sit is very important in camp. It is a creature comfort that adds great value to the whole trip. I'm well beyond the age of sitting on the ground, so I agree with him and we've always tried to have someplace comfortable to sit while tripping.

In early 2014 I bought L.T. the Larry chair (from MEC, yes that's its real name) for his June birthday and picked myself up a tripod chair at the Boy Scout Store. L.T. warned me that my chair would not be comfortable. Hey, I paid $15 for it, it was going to be GREAT! Nope. It was horrible. After a short time of sitting on it, it cuts off the circulation in the back of your upper legs and becomes a painful place to be.

Larry is extremely sturdy, he can even lean back on it with those great legs (the chair's, not his).

I found a different chair at Le Baron. It was half the price of the Helinox chairs at MEC and looked exactly the same. It's a Rockwater Design, the Nano Ultra-Lite Chair. 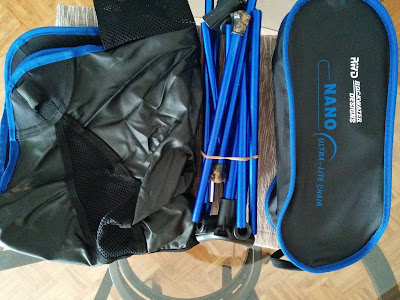 This chair has done me well. I do like it. It's just a little unstable and the legs can sink into the ground quite deep. I've fallen out of it and broken the pump on my fuel bottle (also visible in the picture above). **To be fair, it was dusk on an island campsite on Catfish Lake where grey mice were throwing themselves against our screened bug tent and they startled me.** I lost one of the feet for the back of the chair, which made it sink even faster into the dirt. But I found the two baskets that came with my trekking poles and they fit on perfectly. This helps with some of the sinking. Also, as you'll see in the picture below, I've put a racquetball ball onto the front leg. An internet idea was to use tennis balls, but this is smaller. It's also to help the legs not to sink in.

L.T. decided to buy himself a new chair that is lighter than Larry. He loves Larry to no end. But Larry is a heavy fellow.

He took this one out for the first time in 2016 and he didn't really like it. It's too flimsy. It's supposed to be a leaner, the angle is more reclined. He found it unstable and just not the right angle. He couldn't get comfortable in it.

And he insisted on buying me a new Helinox chair for my birthday in 2016. I would have never splurged on this myself. It's a bit larger and heavier than my Nano, but I love the stability and the height of this chair.

I find that my hips and legs get stiff when I'm constantly sitting with my knees higher than my hips. The canoe seat is like that and my Nano the same. This chair solves that problem.

And last, but not least, but hopefully the final one, chair #8. For Christmas I bought L.T. a new Helinox chair. I chose a red one. He's having a bit of a sinking problem with it here on our first trip with it. But he likes it so far.

And I picked this up for him at MEC after our Radiant Lake excursion: It will go under his chair, each of the legs fit into the corners, the strap will come up and attach to the middle bar, holding it in place. And it will prevent sinking. That dark spot in the picture behind his red chair? That's where the back leg had sunk quite deeply into the dirt. As a bonus, the ground sheet will provide a spot to put stuff off the dirt. Nothing tall, but someplace dry at least.

Then there was the trip where he forgot to bring a chair....

Latest update: there's a new Larry in town and he's much lighter!