Breakfast today was oatmeal.  I didn’t like the last version of oatmeal from a previous trip, so I added more to today’s breakfast.  I mixed in milk powder, some crushed walnuts, brown sugar and cinnamon.  Today’s big treat was cinnamon buns.  Instead of making individual buns, I just folded the circle of dough over and made a big cinnamon bun quesadilla.  LT flipped it over halfway during baking and it was delicious.

We packed up and were on the water shortly afterwards  It only took 15 minutes to cross the lake, which was thankfully very quiet. We packed the car, drove out the dirt road and were eating poutine in Deep River by 1:30, home by 4:30. It was nice to come home a day ahead of the big traffic. There were two accidents on highway 17, one just after Deep River that had just happened, a vehicle went off the road and was upside down in a swamp. One police car was there.  We passed two ambulances on their way to that crash. The highway was closed with a detour shortly after that as well.

The canoe was returned well in time, I enjoy doing business with Algonquin Portage. I had noticed a couple of canoes on their way into Catfish Lake on Saturday that had their insignia.

Epilogue:
Obviously I was able to get all my pictures off my SD card, woo hoo! And, believe it or not, the camera eventually dried out, I put the recharged battery back in and presto, it worked! We have taken it on other trips since.

I'm going to cheat here and show you some pictures we took on Day 1, but hey the location is the same for today! 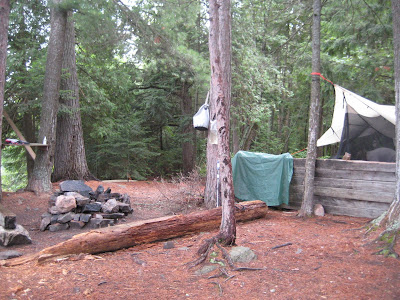 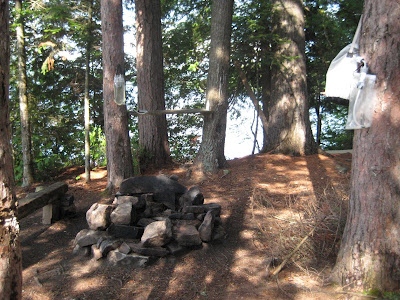