Eustache Lake - so pleased to make your acquaintance! (Part 1)

This spring when I was talking to a friend of mine about her planned trips to Algonquin Park for the summer of 2015 she mentioned they were going to try to go to Eustache Lake. She'd heard that there were some nice cliffs along the lake's edge.
I was curious. I looked at it a lot on the map. It's one of those lakes that isn't along a route to somewhere else. It's the destination. We didn't work it into any of our trips this year.

But we've had a really warm November. And December. With hardly any snow. I've been seeing Kevin Callan's posts on Facebook - he's off canoe camping somewhere right now. I managed to convince LT that the park held one more adventure for us in 2015.

We don't have any winter camping gear. But if we cleared our calendars we could take the day and just make it our destination, turn around and come home. LT was a bit hesitant to carry a canoe through the forest for over 2 kms, especially with no guarantee that when we got to the portage end there'd be a place to put in that wasn't frozen over. I suggested we could just hike in and check it out for a future trip.

On Saturday I went over and helped LT put the canoe back together. He'd tucked in it for the winter by taking out all the wooden thwarts and the seats. I planned a hot lunch and breakfast to eat in the car. I packed my big backpack with the following: my chair, the stove with fuel, the kettle, a blanket, the saw (in case we needed to make a fire), and a lunch bag with 2 thermoses full of beef stew, buttered rolls, clementines, toffee, chocolate fudge, teabags and sugar. I brought my DSLR camera and hiking poles.

There are a LOT of logging roads on this access road. Nothing much is marked past the road into the Achray access point. We went the right way at first, but the road became so narrow we thought we had turned down the road at the bottom of the map above. We took the other way and ended up at the Lake Travers access point. It was not as expected. We both thought there'd be more signage and maybe something like a dock or boat launch. That lake can have seasonal motorboats. We go out and walked around, I took a few pictures.
The bridge in the picture was confusing. It's a long bridge! But there was signage saying "NO ACCESS". While we were standing on the shore, a car went across the bridge away from us, so into the no access zone. Hmmm.

We saw a lot of vehicles coming out of the park as we drove the 75+ km from the gravel road beginning to this point, mostly trucks. There was a sign at the Sand Lake Gate saying that there is hunting right up until the beginning of January and to take care, stick to park routes, no bushwhacking.

Time to turn around and go back to the road we doubled back from. We went back to it, got to a trailer parked at a fork in the road and decided to take the other fork. Bingo, this was the one. However again we ran into an issue with signage. There was no sign to indicate access point A52. In fact, it looked like we needed to drive a short piece on the abandoned rail bed. It wasn't rough going. We didn't see any portage signs to indicate that we needed to park and head out on foot. We got to a point on the railbed where a couple of very large rocks had been placed and there was a gate. We parked the car, got out, walked around and decided we were on the right track (haha, get it? right track? train track?).
We figured that no one else was probably going to be parking here today to access Eustache Lake, so LT pulled the car over to the side as far as he could and we headed out on the train bed.

Within 500 meters we found the portage sign.
Off we went into the woods. This portage is not a difficult one. It is long enough, we took one rest on the way in and the way out. The light dusting of snow made it very easy to see animal tracks. The first set of tracks belonged to a deer. Then we saw some smaller ones that look almost like cat prints - I'm guessing a fox. But for more than half the trail we followed these tracks:
We weren't quite sure how many animals we would see on this trip. In the car on the way here I'd seen half a dozen deer on a farmer's ridge, a couple of very fat turkeys in a farm field and even a large male moose feeding in a marshy area.

Besides the wolf tracks we saw rabbit, squirrel (or chipmunk) and mouse tracks. Chickadees serenaded us at times in the forest and the odd jay called out a warning we were coming. 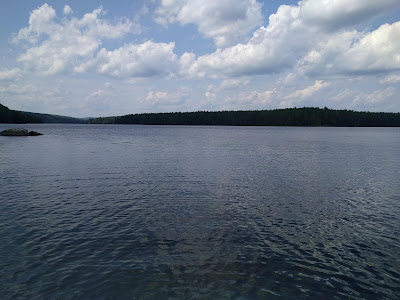