5 a.m. comes early. It was our agreed-upon time for me to arrive at L.T.'s to load up the car and head out. I was skeptical, L.T. is not an early bird. But when I pulled up at 3 minutes past 5 he had all his kit and his canoe sitting on his front lawn.

We loaded the car, tied on the canoe, took the breakfast he had cooked for the both of us and were on the road by 5:30. We made it to the Sand Lake Gate around 7:30 and were launched on the lake by 8:30 a.m. Record time.

It was a busy launch site. A Boy Scout troop were readying for their launch. Adults were shouting orders and it was mayhem, with the eager ones at the beach ready to help, others were off doing whatever it is that young boys do when left unattended. We were able to easily get the canoe off the car and all the gear out before the Boy Scouts were even remotely organized.


There was a breeze and for some heavenly reason it was at our backs. A breeze in this direction is a rarity on Grand Lake, but we were going with it. It was a sunny day without a cloud in the sky and warm enough for the time of year. We were hoping to go to the top of the lake and get the same campsite we had last May long weekend. Last year we left on Friday morning and today was Saturday. There was a chance that others had already gotten on the lake yesterday.

I was nervous thinking about the swift under the train track bridge. The very first time we went up that swift in 2014, it was really high and flowing very fast. Last year the water was very low and it was a different challenge trying not to hit any rocks. This year it was almost perfect. Enough water to not be in danger of hitting any rocks (except a big one on the upper side that was quite visible with all the red canoe paint stripes on it) and not so much that it was flowing crazy fast.

Shortly after this section L.T. spotted something in a far off bay to our right. We circled back and were able to see a moose. He didn't look very big, maybe a one-year old male? We paddled a bit closer to see, but not very close so we wouldn't bother him.
Ahead of us there was one canoe with a couple of avid fishermen. I imagine the Boy Scouts headed off in a more southerly direction. There aren't many campsites on the northern part of the lake and once past the bridge there are only three that are quite far apart. 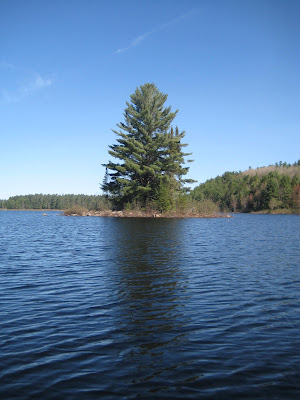 After our moose siting, it was time to go claim our site. Of the three sites, the first one on the left has a nice frontage facing south down the lake. We had stopped and checked it out last year and it was very shallow. We would not have enough room to put up our bug tent and the hammocks would be crowded. L.T. was very disappointed last year, he really thought this spot would be the bomb. We didn't even glance at it while passing it this year.

The site at the top of the lake, our favourite, is several bays past the first campsite. I have now named them "Deception Bay", "More Deceptive Bay", and "Desparation Bay". Finally we were around the last corner and our hearts sank. Someone had claimed the site. Also there were people camped on a knoll across the lake from them on a space that was not a campsite. Last year there was a guy with a motorboat camping there with his kids (he kept yelling a lot at them). When we were checking in this year I made sure to ask if there was a new campsite there as we had seen someone camping there the previous year. There isn't.

Well, someone else was using the non-site this year again. We turned and went across a wide bay to the third campsite, which we had scoped out last year. It's next to a marshy area and we suspected it would be a crappy site but were pleasantly surprised when we checked it out last year. So that's where we ended up.

We got out and inspected our new home for the next two nights. The site mostly has very tall pine trees with mostly dead branches going up about 40 feet. There's a considerable amount of dead fall on the site. L.T. had bought 2 bags of wood at the gate. Grand Lake has some very busy sites and deadwood is hard to find. Not on this site apparently.

The fire pit is a round metal ring, very tough, it looked like it was made specifically for this purpose. Some wood was piled up beside the pit. We added our two bags. The fire pit had a couple of log benches and a nice view of the lake. 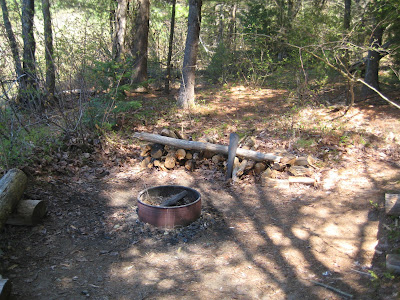 Further up the site, there's a table. It looks relatively new, probably added this spring, but whoever made it didn't lash down any of the cut branches. Also it's very high, which is okay for L.T. 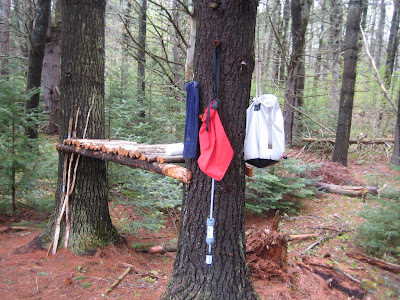 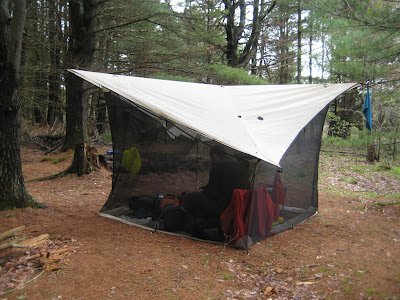 The initial spot we chose for the hammocks got changed. Just as well, I usually need several attempts at hanging my hammock anyways. We knew that it would probably rain on Sunday, so L.T. wanted to hang the hammocks close enough together that he could also put a tarp over the middle. We got both the hammocks up, then the bug shelter, then it was time for lunch. 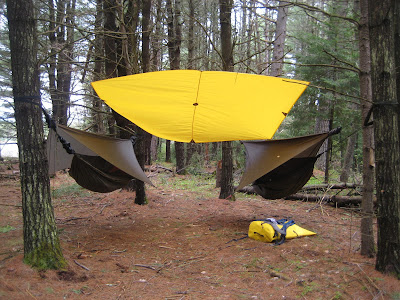 L.T. packed lunch for us. We had various cold meats with cheese, cut pear and apple and green grapes. We ate lunch a bit later, around 1:30. Then we slowly took out all our kit, filling up the shelter. I got a new chair this year, Santa gave it to me, and I love it. It's much higher than my old chair, so it's way easier to get up out of after sitting on my butt all day.

We had a resident woodpecker, we named him Woody, he regularly visited several trees right by the bug shelter and he'd peck away then sing. There was also a resident chipmunk. However we were very respectful and did not feed him. The loons were spectacular. When darkness fell there was so much calling between the two of them. We could hear their calls echoing down the long lake.

This year there weren't as many motorboats interrupting our peace and quiet. They are allowed on this lake. The eager fishermen are usually out this weekend trying to get lake trout and other fish that are in season (I'm not sure which ones).

L.T. started a fire so there'd be embers to cook the fresh dinner he brought. We ate around 6:30, which probably wasn't enough time between meals. And we had only sat on our butts for most of the afternoon. The steaks were huge and I couldn't eat any of the mixed potatoes and carrots that were apportioned to me (that's okay, I chopped them up and made a hash brown medley for breakfast the next day - but I'm getting ahead of myself).

We continued to feed the fire and after the sun went down so did the temperatures. I think the magic number is 10 degrees Celsius. Once the temperature goes that low the bugs all go to sleep. We spent some time around the fire and ended up going to bed around 10:30. The peepers had started up, we were close to a marshy area and they'd be plentiful. I had brought earplugs, but once in my hammock, I wasn't sure where they were. 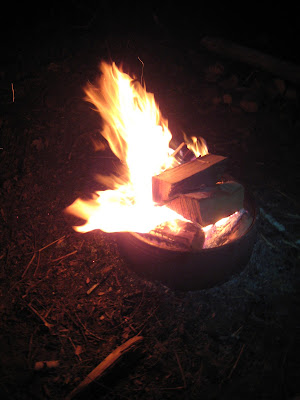 Sleeping in a hammock is a different challenge than sleeping in a tent. I feel a bit more secure in a tent with L.T. next to me to scare off all the wildlife. Sleeping on the ground doesn't bother my back, but it bothers his and we've moved to the hammock system. I carry mine, he carries his and the bug shelter. He got me the ultralight hammock system, his is a classic hammock.

In my hammock, I use a mummy-shaped Thermarest, the one I bought with my winnings from the blog contest a couple of years ago. It folds down into a very small size, about 1/3rd the size of my other air mattress. This was the first trip I used it on. I have a reflective pad I put on the mattress, I got it at the dollar store. It's meant for car windshields, but it's perfect for sleeping on. It has a thin foam backing which ensures it sticks very nicely on the air mattress. I have a sleeping bag I love, down-filled. And I also have a throw that I sewed together. I think I need to add some Velcro to it to help close it better.

Getting into the hammock is a challenge. It needs to be hung at a height that you can lift your butt into, but not so low that when you get your full body in it that you're only inches from the ground. When you're getting in, you want to have it open for only a nanosecond so all the bugs flying around you don't come in with you. And you have to place your body so that you can get into your sleeping bag and inner bag liner, not just sit on top of a closed bag. Good luck trying to get all that fabric out from underneath you when you try to climb in the bag. You need to leave the sleeping bag fully unzipped for this contortion.
Getting settled in the hammock also takes a bit of effort. You can lie on either side or on your back. Depending on how well the hammock is hung (or how poorly), it can seem like you're in a banana shape when lying on your back, which isn't great for comfort. And turning over from one side to the other is a challenge as you need to lift and land on the same small width of the air mattress. It's not just a matter of rolling from side-to-side. And you have to make sure you keep the sleeping bag in the same position. Mine has a hood on it, so it works in only one position. Actually the hood works perfectly with the rounded top of my new air mattress. I tucked it over that and it held pretty well. I also tucked my new pillow under the hook, which was perfect, it really helped keep it in place.

It was cold out and you knew when a limb or your back was off the air mattress almost immediately by the chill. Brrrrr! But once you get comfy, on the right spot, all muffled into the double bag system, it's oh so warm and toasty!