My favourite part of planning a trip is selecting and preparing the food we will bring along.  Don't get me wrong, I love talking about various routes we may take, but I get to take over when it comes to the food.  There's a lot of work involved and probably too much to fit into just one post so I'll be breaking it down into several posts. It might not be as exciting to follow as having a trip log broken up into several posts, no nail-biter content here.  But if you're interested in food prep, you might find some helpful ideas.

I have a food dehydrator I purchased at Walmart.  I picked up a Food Saver vacuum sealer from Kijiji this spring.  And my favourite source for recipes is from Chef Glenn.

First of all, we decide how many days we will be in the backcountry.  We eat breakfast enroute the first morning.  We have a fresh lunch the first day and usually a fresh dinner the first night.  On our last day we will have breakfast and maybe lunch, but usually treat ourselves with french fries from a chip wagon on our drive home.

Here's the plan I made for our food for the three-day trip we took in June:
(* means it's a recipe from Chef Glenn)
Actually we had to shuffle meals once we started that trip as someone forgot to bring the fresh dinner of chili with us.  I'm not naming any names, but it wasn't made by me or in my freezer, I'm just saying.

We usually leave as early as possible in the morning and eat breakfast in the car.  We've tried the drive-through at Tim Horton's but honestly we prefer our own food.  Mostly we've prepared scrambled eggs and had them on a wrap with bacon and cheese.  But that requires cooking eggs at 5:30 a.m.  On our last trip I made egg salad and put that into wraps that morning, no need to turn the stove on! 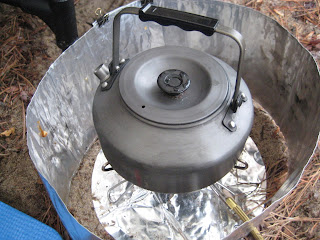 We're not coffee drinkers, so tea is an easy thing to bring along and prepare in the woods.  I have a great kettle I use ALL the time.  I got it at MEC and after using it the first time, the button on the lid fell off, I located both the button and the screw holding it in, but the plastic in the button was stripped, so I returned it to MEC, no problem! They gave me a new one.  I noticed this summer that Canadian Tire had the same kettle a size larger than mine.  I almost bought it too.

For breakfast LT buys thick bacon at Loblaws and cooks it all up beforehand. He packs it in paper towels once it has cooled, then puts it into a small Ziploc baggie for transport.  I understand that the scent of cooking bacon attracts bears (can you blame them?).  We think that just reheating it doesn't emit the same amount of delicious smell, but it sure tastes just as good.  On our first morning in camp we usually have fresh eggs.  Sometimes we bring bread, like English muffins, to have with the eggs.

Another breakfast we like is blueberry pancakes.  We get the instant pancake mix from the grocery store that just needs to have water added.  I pack it in a Ziploc baggie with dehydrated blueberries.  When preparing to eat, I add the required amount of water to the baggie, mix, let sit for a bit to rehydrate the blueberries, then I cut a small corner out of the baggie and squeeze the mix out into the hot pan with melted butter.  I bring real maple syrup to top the pancakes.

We've had oatmeal a couple of times, but it's low in the rotation order.  It's usually brought along for longer trips.  I add dehydrated banana chips, cinnamon, and chopped walnuts or almonds to the instant oatmeal.

I tried a recipe for dehydrated eggs (Chef Glenn) that we both like.  I bake the eggs first in the oven with polenta.  Once cooked, I dehydrate that mixture.  I also will dehydrate a can of "Flakes of Ham" to accompany the eggs when eating them in camp.  This rehydrates very nicely and gets LT's seal of approval.  He's had his share of powdered eggs, so he knows what tastes good in the egg department.

Having four different breakfasts to put into rotation is enough for the amount of days we've been out on so far. Although the fresh eggs only work for the first breakfast in camp.

One morning I even made cinnamon buns!  I had found a pizza crust dry mix that I added water to.  I let it rise a bit then used a plastic cutting board to stretch it out into a square.  I mixed up brown sugar, cinnamon, walnuts and butter and spread it on the square.  I rolled it up, sliced it placing each "bun" into the frypan with melted butter.  They weren't pretty but Oh My Gawd they were delicious!  But doesn't everything you make outdoors taste delicious?