Today would be a complete reverse of Day 2.

Alas, still no pictures to share! It was a gorgeous day. We had dehydrated eggs and ham for breakfast. I had found a recipe where you bake them first with polenta in the oven, dehydrate them and add a bit of milk powder when rehydrating.  To help the flavour, I added a can of ham that I had also dehydrated.  They were yummy and perfect fuel for our day.  We were packed up and on the water by 10 a.m. (I have a full post just on the eggs here.)

We took a bit of a false start out of Catfish Lake and had to double back. Near the top of the lake we could hear singing. Girls singing. Several canoes were coming out of the top of the lake towards where we were going. They were all girls and all singing loudly. Motivational I'm sure.

We met a couple of older men just coming out our first portage. One guy looked well traveled, the other was quite red in the face and it looked like he was already suffering. Red-faced guy warned us that the long portage was really, really tough. We tried to figure out where those guys had started their day, I assumed not at Cedar Lake it was still so early in the morning.

Portage 1 was tricky to land at. The flow is going in the same direction as we were with the take-out on our left just a smidge above the old, broken log dam. I found it a bit nerve-wracking. I'm at the front of the canoe and can be a bit of a nervous nelly in the water. I'm also a really bad steerer.

While in Narrowbag Lake we passed two parties going into Catfish. One canoe held a couple of younger men. Their canoe was sitting very low in the water. I joked to LT that it was the case of 24 beers weighing them down - not that I could see it, I was just making a guess. Shortly after they went by the next canoe passed with a young couple and dog. I pointed out to LT that when guys travel in canoes they don't wear life jackets, unless they're with women. LOL

Portage 2 wasn't too bad and was over quickly. At the beginning of this portage, LT decided to carry the canoe first while I carried my backpack. It worked out so well, that he changed his strategy to continue doing that the rest of the day. I walk pretty slowly with 50 pounds on my back. He’s also a foot taller than me, but he insists leg length makes no difference in speed. The canoe weighs less than his backpack, but it is clumsier to carry and that slows him down a bit more. We figured out that he’s just about at my speed with the canoe, where he is much faster with his backpack.

Portage 3 was the big one. Today we were at an advantage. First it wasn't raining on and off, it was a gorgeous day. And we were basically going downhill. We made sure to stop at Unicorn Hill and take advantage of the canoe rest. I think this portage was the first one where we'd seen a canoe rest. I stopped at a campsite near the end to make some KD for lunch. I thought it would take LT longer to go back and get his pack, but he was back just as I was stirring the bright orange cheese powder into the pot. This would be a good place to camp if you were not expecting any more traffic for the day. There aren't a lot of places to pitch your tent, but the noise of the water flowing by would be very soothing to sleep by.

Today this portage took me 45 minutes to walk. On the way in it was 55 minutes.

Landing at the top of portage 4 was the scariest. It was hard to tell where the landing was. We were above the huge waterfall I have pictures of on Day 2. The roar of the water falling down these falls was twinging on my nerves. We couldn’t see the portage sign as we hugged the left bank.  We had to veer out into the river above the falls to finally see it, phew! And even though the end of the portage is a steep down almost directly into the water, at least it was down and not up.

Portage 5, last one of the day. We were passing more people en route today. It was Saturday and everyone was making their way into the interior for the long weekend, Monday was a holiday. When we landed at the top of it and were unloading the canoe out of the woods walked two older couples. The women had on bikinis, the men in bathing trunks with tank tops. Everyone was carrying a beer. They were wearing Crocs or flip flops. I think one of the men was smoking a cigar. It was kind of a "Huh?" moment. They were staying at the car camping facilities across Cedar Lake and had a boat with a 25 HP motor. They had come up looking for the trail to the waterfall (that we still didn't take today).

I made a joke about getting them to help carry our stuff. I was honestly kidding, but both women were game. The guys were making excuses, one of them claimed he'd just had both knees replaced in the spring. They turned and went back into the woods from where they had come. LT and I stopped for a break to give them some time to make it to the trail turnoff so we would not have to pass them when he was loaded with the canoe.

On the portage we ended up having to pass them going down the trail anyways, they weren't walking too fast. I guess the new knees still needed to be coddled. We passed a young couple making their way up the portage. The guy came first. He had his lifejacket on, it wasn't fastened up, he was carrying bags in either hand, he might have had a small backpack on. Behind him, his female partner had a huge canoe backpack on, and was carrying the canoe. Wow. She’s a tougher girl than me, and I told her so.  I was hoping LT wasn’t getting any ideas seeing her!

Finally we made it to the bottom. We quickly loaded the canoe and just went back to the campsite we had the first night here. We definitely made better time that the trip in, but we were still pretty beat. We shaved a full hour off our travel time. Nice weather and coming downhill along a now familiar path certainly helped.

The lake was a lot busier.  It was Saturday of a long weekend.  The campground across the lake was probably full.  People passed by on a regular basis, both in canoes and in motorboats.  We did get our original campsite and set up quickly.  Dinner was spaghetti, but I forgot the tomato sauce.  Fortunately we had skipped a lunch that had a salsa I could substitute and it was delicious.  There were two squirrels that were having quite the chase with each other at our campsite – it was very entertaining.

That night was quiet.  There was no repeat of the disturbance we had the last time at this site.  It is very surprising how quiet it gets at night.  We could sometimes hear the river coming into the lake if the wind was blowing the right direction.  We were able to sleep with the fly off again tonight - it helps keep the tent cool.  It was even a bit cold in the early morning hours. 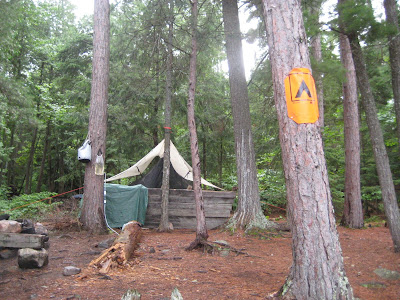