It was a much quieter night last night. No wind, no big lake noises like waves and water lapping, no trees rustling in the strong breezes. I woke up a lot during the night but did sleep better overall. There's a bird that starts singing before the light starts, he calls "twit, twit, twit" over and over. I have no idea what kind of bird it is.
Breakfast was blueberry pancakes with butter, real maple syrup, and bacon. I let the pancake mix sit a bit longer in the ziploc bag with the water, it rises a bit I think. We cut a corner off the bag and squeeze the mixture onto the hot frying pan with melted butter in it. LT cooks the pancake breakfasts, and does a great job!

The smile of the day was when LT got up out of his hammock. He uses a sleeping bag liner, navy blue. When he goes to bed it's quite the acrobatic effort to get the liner, the sleeping bag, the blue foam mat, his pillow and clothes all sorted out. This morning as he walked away from his hammock, he was trailing his navy blue liner behind him. The edge was tucked into the back of his pants, the bottom dragging on the ground.  He was like a backcountry bride, LOL striding over to the firepit and I burst into laughter, poor guy. It's usually me doing something goofy.
We seemed to be getting slower at starting our days. We didn't launch until 11:30 today. The first portage was really close, today was going to be a big walking day, 4 portages, 2 over 1 km. The first portage was a warm-up at 520m and took us 20 minutes. 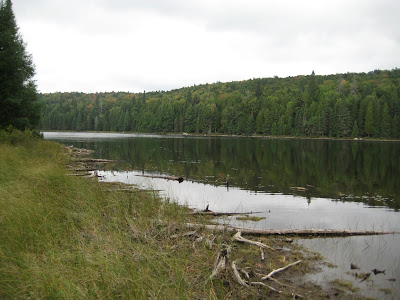 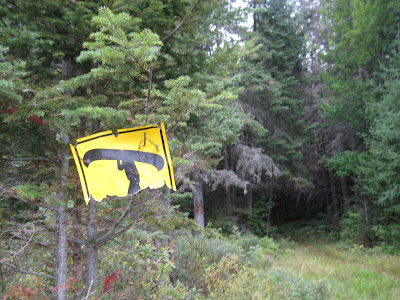 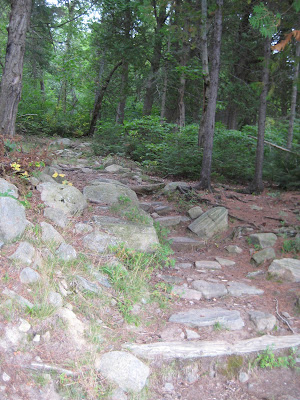 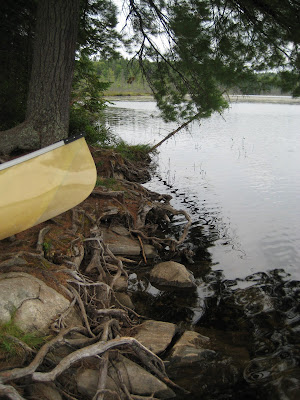 Right after I stated that we would probably not see anyone from now on during our travels, at the beginning of the last portage there were 2 canoes on the shore with multiple bags spread all over the place. I've noticed that everyone assumes they are the ONLY people around and take up a lot of space. Fortunately it was a roomy enough portage spot. There is a road running along the lake just a few steps up from the shore. Hmmmm, would we be walking on this?  Nope!

As we were gathering our stuff, an older gentleman came out of the woods and greeted us. He was here with his wife, his 2 kids and their partners. A canoe camping trip is their tradition, they've been doing it for 30 years, only missing one year. That explained the large number of bags with 6 of them total on the trip. He'd carried one of the canoes halfway up and left it at the canoe rest (pictured below). On longer portages often a canoe rest is provided around the middle of the trail. It allows the carrier to set down the canoe without having to hoist it back up from the ground. Although LT is pretty adept at doing that.

Shortly after we started along a very nice trail, very similar to a hiking trail in Gatineau Park (it must have been a road at one point), we met the kids. They had carried bags to the portage end and were going back to get a second load. Mom was waiting at the other end.
As the father came back a second time empty handed and met us just past halfway, I stopped him and asked him to take my map out of my backpack and show us where he planned to camp. We would be in the water before them and even though we were only 2 parties on a lake that had 18 sites, I wouldn't want to take the spot they were counting on. This was new territory for us, we had no specific preference. While he was showing me, I asked him for recommendations on a good site. He pointed out 2, one with a beach and one on a raised rocky area.

Meanwhile, we came to the portage end and LT had to wangle the canoe in the water (yes, that is an official canoeing term!) around the canoe that was there already and the bags strewn around all over the place. He managed to place it, we wanted to push off as quickly as possible. I took off my shoes and socks so I could stand in the water. LT is extremely gentle getting into the canoe at all times. This was the only time I thought we might flip in the shallow water when he was getting in. I think it's because he had an audience of 2 cute young women standing on shore.

The day was becoming more grey and threatening rain. The family was going to be headed for a campsite very close to the portage put-in, a south-facing spot on an island. We headed up the right side of the lake checking out each campsite as we went. None of them looked particularly great. The thing about traveling this time of year, you get a bit more picky as you feel you pretty much have the choice of the litter, so to speak. We even went up closer to the portage where 2 campsites were across from each other at a narrow section. Mmmm, no, neither appealed. The funny thing is the rocky campsite that had been recommended to us was very visible. And it looked great. We turned around and went to that one when the rain started.

The first order of business was to hang tarps so we had somewhere dry to hang out. The bug shelter tarp went up first, then the flappy fly was added to that space to give us more room to pile bags in an effort to keep them dry. 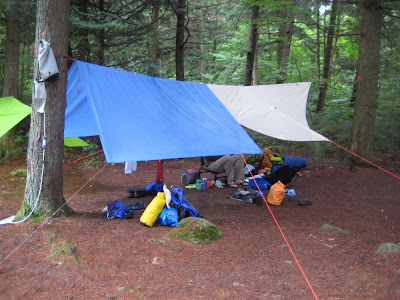 The next thing to do was to make a lunch. It was 3:30, so I pulled out some comfort food, Kraft Dinner with pepperettes. This trip I had used my Food Saver vacuum packer a bit more and I precut all the pepperettes I was going to use for meals. Half a dozen for the KD, half a dozen for the pizza. With the rain coming down, KD felt awesome in our bellies.

Once the rain stopped we started hanging the hammocks. We tried sharing a tree, as usual. However the second tree I was attached to wasn't quite thick enough. As I sat in the hammock to test it, the tree would bend slightly and I'd end up only a few inches from the ground. Again I tested it by sitting and that's when I fell backwards onto the ground. I'm not really a crybaby, but in that moment I was. "I hate my hammock!" I wailed as soon as I caught the breath that had been knocked out of me. I moved it over to 2 trees that were closer to the front of the campsite.
It's a bit of a learning process as to what works for hanging a hammock and what doesn't. I ended up in a much better spot tying it a bit higher and a bit tighter. The initial feel when you lie in a hammock to sleep is that you're in a banana shape on your back with your knees attempting to bend in a direction they don't go. But with the tighter tie, the hammock becomes a bit flatter.

It was probably a mistake to eat lunch so late. With the sun setting (or in this case just the light as Mr. Sunshine had abandoned us) I ended up making a pizza dinner in the dark. I even went into my night gear to get my mini lantern, hanging it from the loop in the middle of the inside of the bug tarp to have enough light to make the pizza with.
Making pizza in the wild this year has entailed me activating yeast, adding it to a flour mixture, letting it rise, squishing it out into a buttered frypan, and adding rehydrated pizza sauce and veggies to it. There were also pepperettes to sprinkle on it, with more of our yummy bacon! Cheese strings peeled apart topped the masterpiece. A very labour intensive chore, but very, very delicious. I do have to cut back on the crust mix though. It's pretty thick.

I thought it might be tough sleeping tonight with all that food in my belly. I didn't make a full dessert, instead I chose to make a single serving of the banana nut bread pudding in my Thermos for LT. It would be ready to eat and stay warm for whenever he felt like it. His belly was bursting like mine and he ended up having it the next morning as "breakfast dessert". I think that sounds like a wonderful new course to add to breakfast!

Today we saw another heron, a grouse in the woods and a chipmunk. The chipmunks seemed to be hiding out. I guess it's a very industrious time of year for them, putting away food for the winter.

A note about today's portages, when reading one of Kevin Callan's books he had described today's portages as really tough, uphill climbs. Yes we did increase in altitude, especially on the 2nd one, going from 376m up to 413m, back down to 399m over a 1,040m length. But I have certainly been on tougher hilly portages. I think this part of the park gets a lot of traffic and the portages are really well used. My worry was for naught.

Other posts for this trip:
Posted by Cici Canoe at 3:02 PM