Today would probably be a fairly easy day for us. We only had 2 portages, neither of them fairly long or with big hills. Our distance travelled wasn't going to be too long.

I slept pretty good last night. I did have to get up around 1 a.m. for a bio break, but managed to fall back asleep until 6:30 a.m. I lay in the hammock for a while. ZigZag had to defend his territory against a marauding squirrel, the hole under our hammocks, about 15 minutes later. I finally got up around 7.

It rained a bit overnight and the trees were still slightly dripping. But the sun was shining, it looked like it was going to be a nice day. Breakfast was dehydrated eggs with dried ham and I had tossed in some dried veggies to spice it up a bit. It worked, so I'll do that again.

This morning I used my Thermos to make a third cup of tea to carry on the trip. We don't drink coffee, tea is pretty easy to make in the woods. We drink our tea with sugar, also easy to do. I usually drink it with milk, but don't mind it without.

I had a treat planned for today - a clean t-shirt, clean shirt, and clean pants. I had only brought one pair of wool socks, but they were holding out pretty good. Well, they are dark gray, so no dirt was obvious. The night before, I had dipped my feet in the lake, attempting to clean them a bit, and when turning my socks inside out, I managed to dump out all the sand that had accumulated in them. Almost clean! I had tried to minimize my wardrobe. The only clean item I had each day was underwear. I was also betting my fresh, beige wardrobe would be pretty dirty by the end of the day. 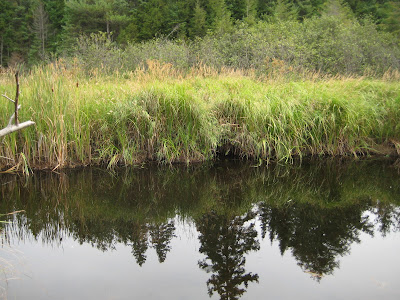 There was a short paddle through Club Lake, then we got into marshy water. As previously mentioned, the water was lower than usual this year and the marsh is nice in that there aren't any whitecaps. However there are rocks. And very low spots we can't paddle over. And sunken logs. My nerves were frayed sitting at the front of the canoe trying to see absolutely everything under the water in our path.

Finally we came around a bend to see this building: 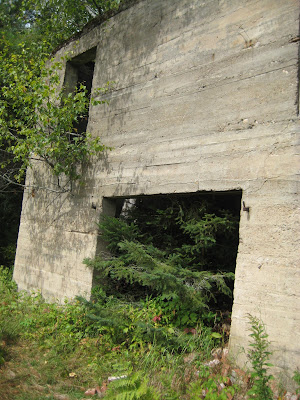 We stopped here for a break. LT was chowing through his snack mix, I was attempting to drink hot tea without spilling it on myself (I wasn't doing really well at that - the tea was pretty hot!)

We made it through this portage rather quickly. It had probably been a road at some point, so it was a relatively easy walk. We got into Mink Lake and were met with a strong wind. We were headed North. We started counting off the spots we were seeing on our right to get our bearings. This is a loooonnnnggg lake!

We went by the first 5 campsites without really considering them. We wanted to be at least halfway up the lake to have a bit less paddling tomorrow. At the next campsite we took a break and got out of the canoe to check it out. It had looked pretty good at first, but there was a lot of grass even though it was relatively high up, and it was hard to tell where the actual ground was to put a tent, even though we didn't need to. Reject!

Back in the water, we had decided on the 8th campsite on the right (okay, all the campsites on this lake are on the right), but as we got closer, it was apparent there was a bright yellow canoe at that site. Wow! People! We backed off and went back to the 7th site.

It turned out to be an awesome site! It was my favourite of the trip so far. This was going to be our last night in the park. Bittersweet. It would also be the coldest. I claim it went down to about 6 degrees. Not that I've got any advanced weather skills, but I did have with me a $5 mini thermometer I picked up at MEC. Aha, I'm giving away all my secrets here!

We had already filled the big "dirty" bag with water from the middle of the lake, so we were set to set up camp. It was 2:45, time for a treat - cinnamon buns, yummmmm! LT started a fire as his first task once we hit land. Well, after he carried up the bags including the large bag of water. This dirty bag holds close to 16 litres of water. My filtration systems cleans 4 litres at a time. This is how much water we usually use each evening/morning.


As you can see from the next picture MY hammock was hung before LT's. That's because he was building a fire. We had a really cool table here, doing dishes with a view. The logs around the firepit were awesome too, very flat, really usable. 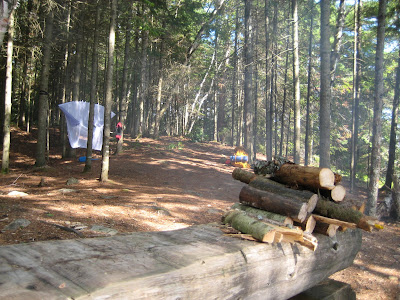 We let the fire die down once the cinnamon buns were baked.
The large black bag in the picture above is a new piece in my kit. I'm not sure if I'll carry it again, today was the first time we used it. It's a shower! I had picked it up at Canadian Tire, it was about $15. LT tried to fill it with water from the lake, but it was impossible to get water into the small opening near the top. He used the water in the dirty bag (it has a spout) to fill it and then he went out in the canoe to get more water for our use.

The next step was to leave the bag in the sun (and we had lots of sunshine), with the black side up for a couple of hours to warm the water. LT hung the bag for me after a couple of hours in the sun and I had my first backcountry shower! The hose has a mini showerhead end that you need to pull out to activate. I washed my hair - that felt so good! 6 days without washing my hair was a first for me.

Treats this trip: I usually bring along large Cadbury milk chocolate bars with various fillings (cashews and coconut, Oreo pieces, etc.). However, when consulting with LT (he usually helps me eat the chocolate), he claimed he didn't want any on this trip. So I didn't bring any. I did bring a package of mini individually-wrapped, chocolate-coated peppermint patties. There weren't that many in the bag, they were handed out sparingly. LT brought some whiskey on this trip, but not very much. It's pretty heavy to carry and I don't think I can dehydrate it. But I guess I could try. :-) I also did not bring along any hot chocolate mix. It's usually messy to clean up, I often drink it after dinner. I just skipped it this trip, but would have liked to have it a couple of times.

BTW the cinnamon buns were pretty delicious. I had forgotten to warm the water before rising the yeast, so I had to warm the cup it was in with the water and sugar. It was cool to see the yeast activating right before my eyes! Unfortunately the buns were burnt a bit on the bottom, but they were 90% edible. Mmmmmmmm!
The last few evenings we had attempted to find a weather report. LT had brought along his iPod that has a radio. He found a CBC station. However, it wasn't really relevant for us. It was giving weather for Timmins and more Northern locales.

I saw something here that I will ensure I use at any further campsites. When I went to the thunderbox to use the facilities, I opened the lid and there was a small, fresh balsam branch there. Instinctively, I grabbed it to toss it away. But then I noticed that the seat of the thunderbox was the cleanest I've ever seen. What a great idea!

It got very cold tonight. I would fight the cold by wrapping my hammock over my face to try to keep some warmth in.

Other posts for this trip:
Posted by Cici Canoe at 2:40 PM