Last day of our trip. A happy day, but a sad day too. Our portages would be very easy today. The paddling wouldn't be too onerous either. 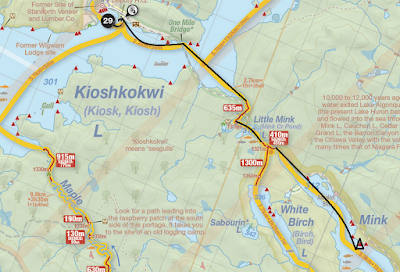 It was cold in the hammocks. I woke up very early and really could not fall back asleep afterwards. It was all about keeping warm. As I wrapped my arms tightly around myself, I discovered some muscles on the back of my arms!

I got up first and didn't even consult LT, I started a fire to get a bit of warmth. There wasn't much wood around that would keep it going for long, but just a bit would be nice. I ended up finding enough small stuff around that it burned long enough to warm us up.

Breakfast was oatmeal with dried bananas, cinnamon, chopped walnuts, and maple syrup flakes. Last meal I'd make in the wild on this trip! Next stop, poutine in Mattawa! As you can see from the photos below, the weather was great.
We surprised a heron who was hanging out in the area pictured above. We saw a couple more herons today. One had flown by our campsite the day before, they are graceful birds for their size.

We knocked out the first portage of 410m in 7 minutes! It's a well-traveled route for sure. Even still, I had my bear bell jingling as I strode along. My knee was very much improved, but probably more because the trail was fairly flat. 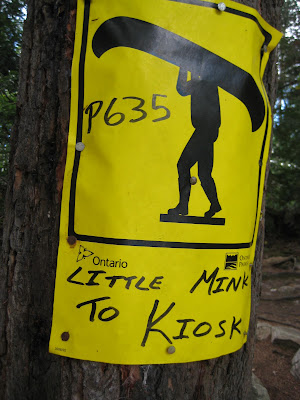 We knocked out the second portage in 10 minutes! Again, this trail is well-traveled and relatively flat. Oh, it might have something to do with the 15+ pounds that I was no longer carrying. 13+ was food that we'd already eaten, and I was only carrying 1 litre of water for the trip out. Usually I was carrying 2 litres and each litre weighs about 2.5 pounds.
It took a bit of backtracking once in this water to figure out a way of getting through the low water. Once we got out into the lake, we were predominantly protected from the wind as we followed the train bridge which is basically built almost across the lake as a solid embankment.


When we were paddling towards the train bridge, we spotted a fellow in a yellow canoe to our right. We went through the left to get to the shore. He landed shortly after us. He was sitting in his canoe on one side, a method the pros use to minimize the canoe's contact with the water. And he was silently doing figure 8's with his paddle as he steered himself to the shore. I recognized the canoe as the one that had been "next door" to us last night. He was doing a solo trip. He had a lot of bags, I can't imagine he was doing single carry portages.

LT went and got the car to bring it to the shore to load it up. We both went into the park office, I wanted to tell the staff member about the blow down on the portage from Mouse to Club Lake (she noted the information and seemed to be glad to have been told). LT did something he never does, he bought a souvenir t-shirt. It's perfect. It's a t-shirt with a portage sign on it. If anyone deserves that shirt, he does. 24 portages on this trip, almost every single one a single carry!

It only took us two and a half hours to get back to the launch, the car and my cellphone. Neither of us usually bring our cellphone, however, when I had left a week ago, my father was in the hospital recuperating from emergency gall bladder surgery. It took another 20 km of driving before I got a signal. As the emails starting popping into my inbox, I was able to breath a sigh of relief to hear that he was well. Still in the hospital, but out on a day pass today and tomorrow.

In Mattawa, we drove around to finally find a chip stand on the outskirts of town. The town was hopping today, there was some sort of waterfront event, the chip stand was busy. The poutines were delicious and I had not 1 but 2 cans of Coke!

The drive home was a bit longer than usual. As we got closer to Ottawa, the weather deteriorated. It was funny to talk to people the following day. They saw their rain on Saturday and assumed that was our trip, the whole trip. Rain. We were so lucky and no one believed that it had been a sunny day for our last day in the park.

Other posts for this trip:
Posted by Cici Canoe at 10:34 AM